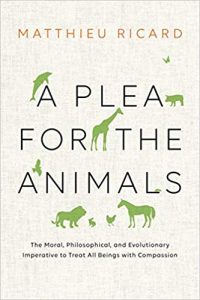 
Although Buddhism has long had a stake in these topics, Ricard prosecutes his arguments with a minimum of Buddhist sources, preferring a wider net that takes in the perspectives of biologists, moral philosophers, journalists, and fellow writers. What gets revealed is a millennia-long conversation in the West about what separates humans from the rest of the animal kingdom and what standards, if any, we should adhere to in considering their welfare, on the one hand, and their exploitation on the other.

Of the many rich and insightful strands of conversation aired out in Ricard’s book, I was riveted by two in particular. First is the notion that we in the West are all prisoners of a monotheistic inheritance, regardless of how agnostic, atheistic, or modern we consider ourselves to be. That inheritance holds that humans are so vastly superior to all other creatures that, with a few exceptions (our pets, for instance) it is impossible to conceive of “them” as being anything more than fodder to satisfy our cravings. This view either devalues or outright denies the emotional life of animals. Although biologists have widely demonstrated the complementarity of animal and human consciousness amongst a very diverse array of species, the view of divinely granted exceptionalism (Ricard calls it “speciesism”) requires a blind faith. Without that societal blindness—a confluence of marketing, education and common euphemisms—we would all undergo a moral and ethical reckoning that might upend more than just the dinner table.

I was also moved by Ricard’s thoroughly researched description of the environmental and social devastations caused by global animal husbandry. Many of us are vaguely aware of deforestation in the Amazon and elsewhere for the sake of cattle operations. We also may have heard that industrial-scale animal farms are ecological nightmares for the water and air quality where they function. But another issue altogether is the sheer inefficiency of devoting so much water and grain to animals that have been bred to be killed. Ricard reports that each year 775 million tons of grain and 200 million tons of soy go to meat production in developed countries while hundreds of millions of humans (many who almost never have access to meat) live in extreme poverty. The prices of these commodities are determined by their value to the meat industry, not by their potential to address world hunger. “Thus,” he writes, “eating meat is a privilege of the rich countries that is only made possible at the expense of the poor ones. During the past 30 years, the amount of meat eaten in the world has increased exponentially, and at the same time the number of undernourished people has doubled.”

From A Plea for the Animals

“It cannot be accepted that intelligence should serve as a criterion to determine whether or not a sentient being should be mistreated, deprived of freedom, or put to death. The only point that should guide our choice is that conscious beings feel a natural desire to live and not to suffer.”

Finally, although he covers a lot of ground in A Plea for the Animals, Ricard has little time for people who argue that plants have feelings, too, and that we therefore should not discriminate between killing a cow and harvesting a head of broccoli. To Ricard, it would seem, this line of reasoning is asinine. If the standard of common morality is sentience, we can still value all life even while we define our terms based on clearly recognizable features of consciousness. To claim otherwise is to hide behind a perverted and self-centered veneer of absolute truth without giving credence to the equally important relative truths of our world. A morality based on this lopsided view can and does lead to a host of disasters, from littering to genocide and everything in between.

Our fraught relationship with animals is not easy to look at plainly, but Ricard serves as an excellent, enjoyable and inspiring guide. For anyone interested in confronting the facts, philosophical arguments, and even their own deeply held views about animals and the world we share with them, this book will serve as an excellent companion.

Click here for a link to the first two chapters of this book.

Hokyu JL Aronson, MRO lives at the Monastery in Mount Tremper, NY. He has been a vegan since 1993 except for that one week on the Basque coast in 2008, but we won’t talk about that.