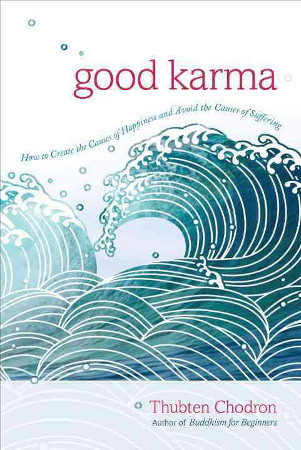 This work is a poetic description of practices undertaken to abolish our habitual preoccupation with “I”, “me”, and “mine” which inevitably results in the grasping and attempts at control experienced as suffering. As its essential point of departure, the poem assumes complete acceptance of the traditional teaching of rebirth according to the karma of one’s numerous previous lives. It describes specific spiritual exercises undertaken with two objectives: alteration of one’s present karmic path towards attainment of favorable rebirths and simultaneous relief of suffering for our fellow sentient beings. The Wheel of Sharp Weapons therefore is a detailed poem of instruction for traveling the bodhisattva path.

For this daunting task, Thubten Chodron, an American Tibetan bhikshuni, of more than forty years experience in dharma practice, and leadership, has provided illuminating and inspiring commentary. She has, for example, divided the 116 verses of the poem into eleven different themed chapters, such as “Understanding and Transforming Difficulties” (dealing skillfully with true karmic miseries, such as serious illness, loneliness, poverty) and “Overcoming the Internal Enemies” (taking responsibility for toxic mental states, such as envy and rage). Most impressive in her discourse on negative mental states is her ability to point out how easily we fall into them. Through the author’s skillful meditations we recognize these negative states not as afflictions of other “bad” people, but as our own mental climate arising during our ordinary, autopilot thinking.

For readers unfamiliar with tantric practices, Dharmarakshita’s poem provides bracing lines of violent imagery and role reversal that tantra employs to promote awakening to the reality of emptiness. To make this material accessible to all practitioners, the author has provided helpful explanations. For example, consider the following verse:

When my body falls prey to unbearable illness
It is the weapon of destructive karma returning on me
For injuring the bodies of others;
From now on I will take all sickness upon myself.

As commentary here, the author teaches the practice of taking-and-giving, in which we imagine taking on the sickness of others as a lightening bolt to destroy our harmful past life behaviors. In the giving part of the meditation we imagine transforming our own body into a healing medicine given freely to others. Taking-and-giving practice fosters purification, a cleansing of our self-preoccupation induced by imaginatively taking on the suffering of another while simultaneously giving something valuable from ourselves to the other. It is a challenging practice requiring the cultivation of all-embracing compassion.

In parts of this work, the poet addresses appeals for help directly to Yamantaka, a wrathful, death-destroying form of Manjushri. Many verses offer colorfully violent imagery to promote sober, direct spiritual intention. Verse 49, for example, intones “O Yamantaka . . . with fangs of the four powers bared, strike the enemy!” In this example, the enemy is the mental afflictions that compel us to take evil rebirths, and the four powers called to prevail over this fate are regret for past evils, taking refuge in the three Jewels, generating bodhicitta, and the vow to avoid repeating previous mistakes.

Dharmarakshita’s poem assumes that individual past evil karma is the sole determinant of current misfortunes and that one’s present well-being is the reward of a virtuous former life. For example, Thubten Chodron states that, “generosity is the cause of wealth.” I think that this deterministic view obscures the complexity of karma. Consider different possible karmic contributions to wealth accumulation: hard work along with relent- less avoidance of careless spending, a skill at embezzlement, winning the lottery, receiving a surprise inheritance!

Although I resist the author’s strictly traditional view of rebirth and karma, I recommend this book for deepening spiritual practice. The text offers both a description of the indefatigable nature of bodhisattva practice and an accessible introduction to visualization practice. The author’s generosity, great skill, and imagination have clearly made Dharmarkshita’s poem a valuable, liv- ing part of the Buddhadharma for contemporary practitioners.

“The most difficult point in the meditation on the selflessness of the person is to get a sense of the object of negation—the self or I that we believe exists but does not. To do this the great masters recommend remembering an occasion when we were falsely accused and then, with one part of our mind, examining how the I appears to exist. That is the I whose existence we want to refute . . . . The inherently existent I appears more clearly when we feel threatened and respond defensively. ”

“Both fortitude and joyous effort are important in our spiritual practice. . . . To have joyous effort, the heaviness of “should” needs to be abandoned. This can be done by remembering our precious human life, its great purpose, and the rarity of obtaining it. This eliminates the sense of unwilling obligation and creates joy in our mind, so we are eager to do what is meaningful.”

NextSangha Reflections: On Mother of All Buddhas