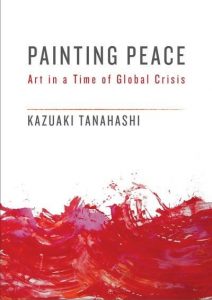 It is perhaps a widely held assumption about the Zen arts that they occur in a bubble of tranquility and equanimity unsullied by the chaos of the world.

One might picture a solitary painter or poet, or a silent line of archers practicing kyudo (Zen archery), each focused singularly on the completion of a perfect act. That assumption might be correct to a point, but Painting Peace, Art in a Time of Global Crisis by Kazuaki Tanahashi opens up a different view.

On the fly leaf before the table of contents the well-known painter, Buddhist scholar, translator, activist, and poet begins his book with a short verse:

there can be no art, no artist.

What follows within is a tapestry, woven together of historical writing, poems, and personal essays. This weaving of voices—all Tanahashi’s but somehow each taking on a different tenor—details the development not only of his own artwork, but of the collaborative, international engagement of many artists, politicians, and practitioners of various faiths against nuclear proliferation, war, and other forms of violence. The color photographs of some of the projects—both in progress and completed—reveal the massive scale and reach of Tanahashi’s work; a scale and reach that could not have been realized if not for his inclination toward collaboration and his skill at organizing. His decades of peace work incorporate impressive multi-media projects, bringing people together to create collaborative public events. Among other works, he co-created a bilingual choral symphony to commemorate the bombing of Nagasaki, and a visual work “Circle of All Nations,” to commemorate the 15th anniversary of the United Nations. Of this he said,

“It was clear to me from the beginning that this symbol of people coming together had to be large, multicolored, and multicultural. It had to be acceptable to most people’s aesthetic standards. Popularity had never been a primary concern in my art. But if the project was to involve all nations, I thought it would be a good idea to create something pleasing to the eyes of all kinds of people.”

To accomplish this impressive work many hands would paint together using one calligraphy brush, so he invented a gigantic brush with multiple handles.

In organizing the text itself, Tanahashi has rendered Time almost a supporting character in the story of his development. Section headings “A Brush With Our Time”, “Engaged in Our Time”, “Principles of Engagement”, and “Shaping Our Time” refer both to his personal relationship with the particular moment and the larger historical picture he lays out.

But the book is not a mere chronology of Tanahashi’s artworks nor of his accomplishments in setting up a surprising number of organizations, the aim of which is the end of the nuclear arms race and war. As I read the book, his sense of past-present-future occupying each experience became clearer and clearer.

A quote from early in the book caught my attention, and I kept going back to it as I struggled from time to time with the heaviness of the chapter structure, or some of the descriptive language he uses regarding his art making. Describing the dense black he used in a new series of paintings on Bengali silk: “I wanted the black to be solid—a place where all things would merge and segments of time would dissolve.”

It didn’t turn out as he had planned, he says: “But this process of my working led me to suspect there are many versions of timelessness, and that we all have our own unique interpretations of non-duality; the oneness of all things.”

This belief that many efforts can thrive throughout time where the one “solid” act or idea may fail, is at the center of what—for me—is the most inspiring section of the book, “Principles of Engagement”. In these chapters Tanahashi lays out in clear and heartfelt language, based on his own experiences, examples of how each of us might engage as an artist, whether one officially identifies as such or not. He goes on to address what “an artist” might be, the collaborative process, and what is necessary to accomplish it.

Part of his encouragement to act through art making, inspired by the Four Noble Truths, Tanahashi refers to as his Four Commonplace Truths. These and the expansion he offers on them in the rest of the section are reason enough to pick up Painting Peace, Art in a Time of Global Crisis and refer back to it as a manual for creative engagement in positive change.

clyde fusei forth, MRO, is a student in the Mountains and Rivers Order living in Phoenicia, NY.