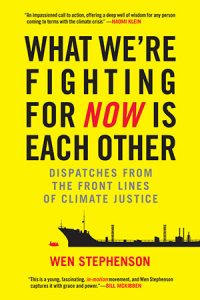 Stephenson makes clear that his goal is not to provide a historical account of the climate-justice movement, but rather to understand the personal and collective transformations necessary to address climate change—not simply as an “environmental” issue, but as the fundamental challenge of our time. He suggests that the climate-justice movement, which recognizes the intersectionality of cli- mate change with all other forms of oppression and injustice, “has more in common with nineteenth-century abolitionism than with much of today’s environmentalism.” Though he acknowledges this is an imperfect and perhaps controversial comparison, I find the parallels he draws compelling: particularly in the sincerely and wholly engaged leadership of the climate-justice movement.

One young woman that Stephenson meets, Grace Ann Cagle, grew up in Texas and joined the Tar Sands Blockade against the Keystone XL pipeline there. She speaks with him about her motivation for joining the grueling and dangerous eighty-five-day tree blockade. Stephenson asks her, what does it take to sustain the struggle? She replies,

If it weren’t for the connection I feel to the earth, I would quit. Because it’s really difficult. I’m not directly fighting for my house or my family, but the earth is in imminent danger, and so are my friends, and it takes this sense of being united, together, and this feeling of caring not just for each other but for the earth… The whole reason I’m doing this is the continuation of life… You can’t just give up…

I can’t. I can’t give up. I was struck by the common threads that weave through many stories in the book— the understanding that this is a life-and-death struggle, that love for people and the earth is central, and that community is essential. The fact that these motivating forces are increasingly leading those in the climate-justice movement to nonviolent direct action and civil disobedience challenged my assumptions about what is truly necessary to address climate change.

Before reading this book, I intellectually understood the purpose of civil disobedience within the environmental movement, but was skeptical that it was necessary. However, I found myself increasingly swayed as I read about the ways in which the political, economic, and judicial systems, not to mention the cultural norms, have thus far failed to respond to climate change with the necessary urgency. As explained by the interviewed activists, civil disobedience not only makes visible the injustices, immorality, and hypocrisies of business as usual, but also embodies the solidarity and passion necessary to “navigate [this] period of intense change in a way that maintains our humanity.”

Stephenson does not shy away from the complexity of the issues around climate change, nor the tensions that exist within the climate-justice movement. He instead offers these as living questions to engage with, as a way to get to the heart of this crisis so that we can effectively respond. One of these questions he comes back to again and again is, How do we reconcile the urgency of transitioning away from fossil-fuels with the need for a just transition that resolves rather than worsens existing inequities? Bryan Parras, a longtime labor and environmental-justice organizer in Houston, Texas, talks about how “most efforts at climate action ‘tend to leave the same folks that are already in bad situations in bad situations’,” and Stephenson juxtaposes this truth with the fact that, as Robert D. Bullard puts it, “if we don’t do everything possible to keep fossil fuels in the ground—Then we’re not going to have any justice.”

Stephenson does not force a resolution of these tensions, but finds strength in the increasingly diverse and passionate community engaged in asking these questions and collaboratively seeking responses. Dorian Williams, a seasoned activist at the young age of 21, reflects on this. She says, “In some ways, the beauty of this whole thing is that because it’s the greatest challenge, it’s also the greatest opportunity to come together and reclaim community, and a global community, and allow people to think beyond themselves.”

From What We’re Fighting for Now Is Each Other:

“The struggle for climate justice is a struggle at the crossroads of historic and present injustices and a looming disaster that will prove to be, if allowed to unfold unchecked, the mother of all injustices. Because the disaster that is unfolding now will not only compound the suffering of those already oppressed (indeed, is already compounding it); it may very well foreclose any hope of economic stability and social justice for current and future generations.

Why, then, does the term “climate justice” barely register in the American conversation about climate change? Lurking in that question is a tension at the heart of the climate struggle: a tension between the “mainstream” climate movement (dominated by largely white, well-funded, and Washington-focused green NGOs) and those—most often people of color—who have been fighting for social and environmental justice for decades.”

Tess Edmonds, MRO lives in Boston, MA where she practices and facilitates ‘design thinking’ with a focus on sustainability.