The National Buddhist Prison Sangha (NBPS) was started over twenty-five years ago by John Daido Loori, Roshi after he received a letter from an inmate at Greenhaven Correctional Facility. The correspondence program developed by the Zen Mountain Monastery community now provides guidance in Zen Buddhist spiritual practice for people in prisons all over the country. This guidance is provided by Practice Advisors who are experienced students supported by the NBPS Directors.

Creative Process is one of the Eight Gates of training encouraged by Daido Roshi during his lifetime for all students, including NBPS members, and we have received many gifts of artwork by prisoners over the years. The art is often accompanied by an expression of gratitude for the assistance provided. Some of the artwork is very refined and detailed, reflecting the skill of a trained artist. Other pieces are of a more basic, spontaneous and anonymous nature depicting some aspect of the inmate’s understanding of the Dharma. It is very moving to see the drawings and paintings of the Buddha as the representation takes on the appearance of the artist and images arise from what the artist see around them in their day-t0-day environment, and in their imaginations.

NBPS Practice Advisors began hanging this artwork for viewing and display in the office area assigned to the program, serving as an inspiration to their letters as they wrote to inmates scattered from coast to coast in prisons small and large. We hope this artwork is inspiration for your practice as well. 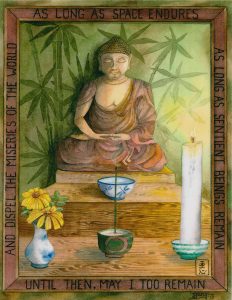