The train ride from Rhinecliff to Buffalo took about six hours, with snow along the way whiting-out the view. Gwen Kimu Coe, MRO, was waiting for Zuisei and I at the Amtrak station. We made a brief stop at her house, where her husband Ray Eigen Ball, MRO, was finishing up assigning service positions to the roster of attendees for the Buffalo Zen Dharma Community’s (BZDC) annual sesshin, February 16-19, 2017.

BZDC, or “the Buffalo Affiliate” as it’s known to many in the MRO, was founded by Kimu, Eigen, and Jeanette Choho Ludwig, MRO, nearly two decades ago. The group meets weekly at the Westminster Presbyterian Church in Buffalo for zazen, and newcomers are welcome on the first Tuesday of every month for an orientation and introduction to zazen meditation.

Once a year, BZDC holds a two-day sesshin at Christ the King Seminary in East Aurora, NY. When we arrived, several students were finishing the set-up for the sesshin. The zendo was already arranged in the chapel. Just to the right of the altar, a large crucifix hung from the wall inside relief plasterwork that reminded me of an enso. 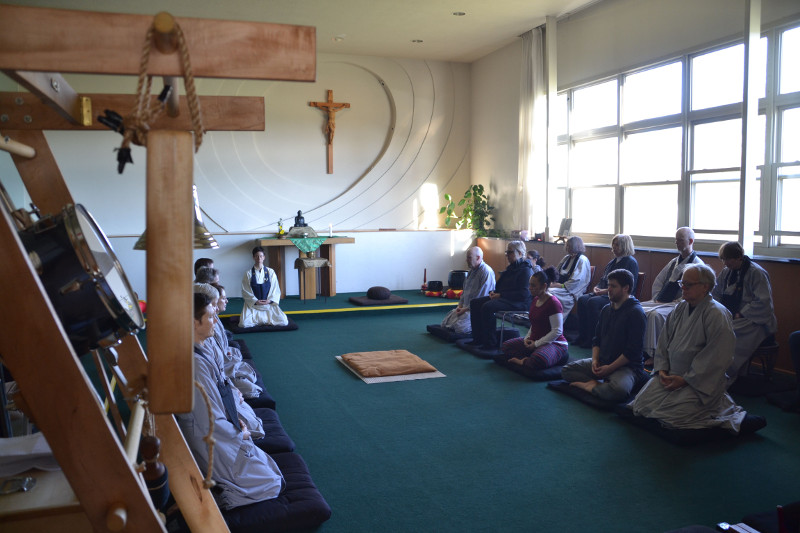 The seminary’s chapel served as our zendo.

When I turned around, I noticed a portrait of Pope Francis on the wall and an American flag tucked in the corner of the room. A wall of windows looked out onto winter-bare trees and blue sky. 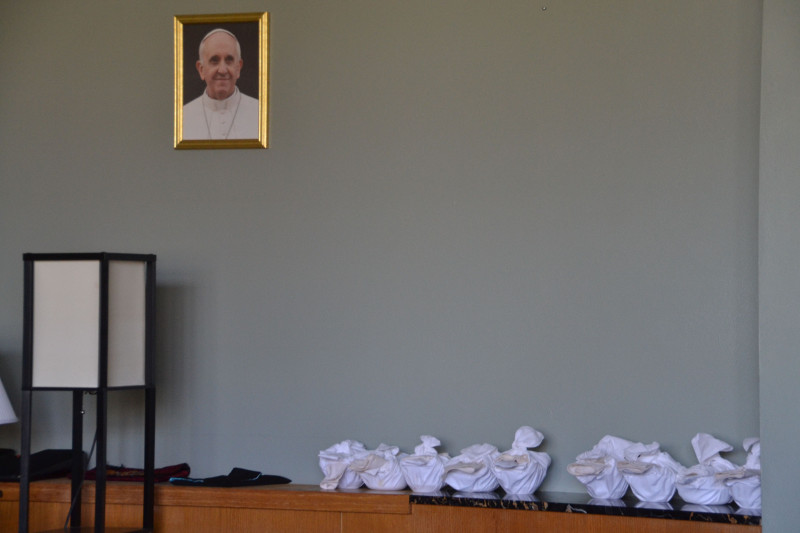 A portrait of Pope Francis in the chapel; oryoki bowls on the shelf below.

The residence hall that we stayed in—the Saint John building—is one of six identical buildings at the seminary that used to house priests-in-training. The process of religious formation took six years, and so first-year priests-in-training would be together in one building, second-years in another, and so on. Saturday was warm enough for us to do outside kinhin (walking meditation), and I caught a glimpse of the statues of the saints at the end of each of the six buildings, one after another—St. John, St. Paul, St. Ignatius, St. Francis, St. Vincent, and St. Teresa. 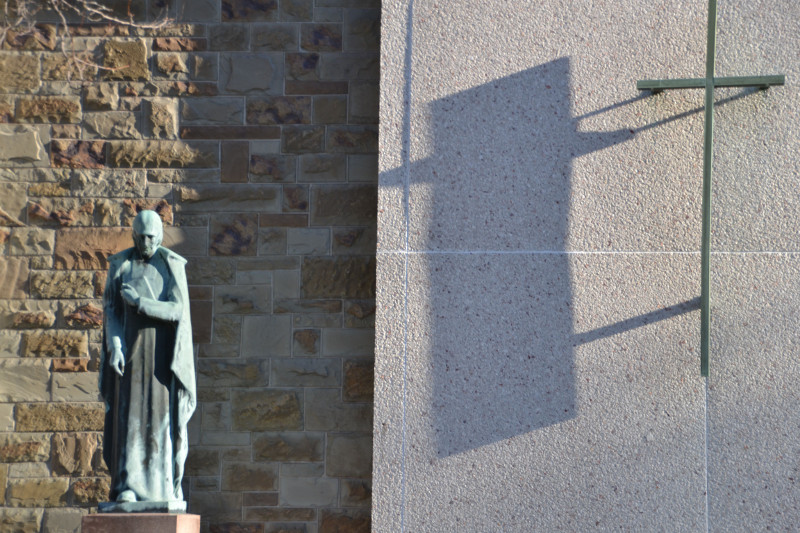 The residence halls have over 30 private rooms each, so each of us had our own simple “cell,” with a closet, desk, chair, sink and bed. 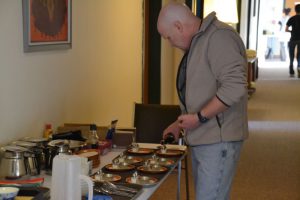 Perhaps no one can relate better to “taking sesshin on the road” than those in our New Zealand sangha, who have been staging yearly and, more recently, twice-yearly sesshins for decades. It’s a feat to bring together all of the large and small details that make sesshin happen: cushions, instruments, altar images and incense, oryoki serving bowls and pitchers, a coffee-and-tea service, signage, schedules. I watched students pull out a heap of two-by-fours and fashion them into a frame custom-made to hold the zendo instruments—a meal drum, a main bell, and a han, or wooden block used to call the sangha to the zendo for periods of meditation. 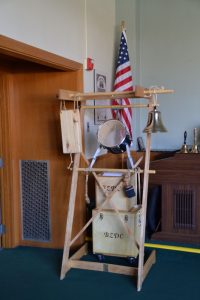 I’ve known students and sangha members from the Buffalo Affiliate for years, some for more than a decade. But this past January, I got a sense of the group’s special bond when I ran into Eigen and Carolyn Alif, MRO, another BZDC regular, in the main building of the Monastery on the Saturday afternoon of a Zen Training Weekend.

“What are you guys doing here?” I asked

In other words, they’d made the six-hour drive from Buffalo to attend a brief, yet important, rite of passage for three of their own who were becoming formal MRO students. So that’s how they do it in Buffalo, I thought. I was deeply moved by this show of support.

Those three new students attended the BZDC sesshin, and like most formal students who were attending, had multiple service positions. Students who are active in affiliate groups often have the chance to step into service positions they might not otherwise be able to when attending sesshin at the Monastery. There were even a couple non-student sangha members who served as ushers. I was impressed with the eagerness and spirit of the students learning new service positions and deepening their study of ones they’ve been doing for awhile, like liturgist and doan. 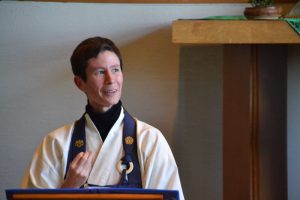 Zuisei gave two talks during the sesshin and ended the Sunday program with a mondo, or question-and-answer session. In the talks and mondo, Zuisei explored three qualities of a twenty-first century bodhisattva: fierceness, gentleness and faith.

Six people joined the sesshin participants for the Sunday morning program and took part in the mondo, answering questions that Zuisei presented: How do you know when to trust a teacher? How do you understand the baroque and other-worldly imagery of some Mahayana sutras? And: When you say you have faith, what are you saying you have faith in?

As a monastic whose life is embedded within practice and training, I am deeply moved, nourished and inspired by the sincerity and effort of these committed sangha members who give so much of their time to maintaining a practice refuge for those living near (and not-so-near) Buffalo. A couple sesshin participants came from Canada—one made a five-hour drive from there to attend. Another sangha member couldn’t attend sesshin because she was involved in a pipeline protest that weekend, but she joined us for the Sunday morning program.

Amidst work, family, maintaining a household and participating in right action and social justice, this sangha is making the time to commit to the practice of zazen—to make contact with silence and stillness, wondering deeply about how to manifest wisdom and compassion in a world that so deeply needs it.

NextZCNYC Dives Into the Blue