A broad circle of mourners ringed the fresh grave—a stone square set flush in the earth, and a clean upright plank that reads “John Shido MacKenzie, 7.22.1946 – 8.4.2016.” The pine trees were still, and the vague slab of clouds held in a week’s worth of dense August air. Into the circle stepped one last woman, in a white suit with a broad-brimmed white hat. She laid down her orange marigold on the dull earth, paused, and turned away to join the circle. After a moment, a lonely train whistle came low and clear across the thick summer valley. Shugen Sensei invited everyone back to the main house to gather and talk. People began the walk down the hill, and the rain released, soaking those who remained through and through. 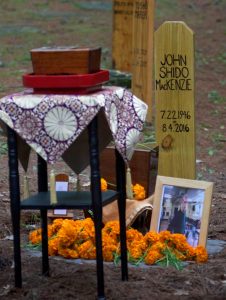 Shido McKenzie came to our sangha through a sharp twist of fate. In his twenties, suffering from drug addiction, he participated in a robbery that went bad and ended up killing a police officer. Sentenced to 25 years to life, he paid for his crime in various New York prisons—Fishkill, Woodburne, and Greenhaven.

While in prison in the early 1980s, he reached out to Daido Roshi with a request to be taught Buddhist practice. Daido could not ignore his sincere desire to learn, and so began visiting Shido and others in prison at Greenhaven. This relationship eventually led to the formation of the National Buddhist Prison Sangha, and to the recognition of Buddhism as an official religion by the NYS Department of Corrections. Shido’s efforts were seminal in opening the door for hundreds of inmates to connect and practice with the MRO over the past thirty years. He also founded a program at Greenhaven to help bring together perpetrators and victims of crimes in an effort to acknowledge the pain that they caused and the responsibility that they deeply feel.

Shido’s life and death are also highly political in the larger realm of the criminal justice system. After serving his initial sentence of 25 years, he was eligible for parole. He appeared before the parole board eight times in the past 15 years, and was turned down every time. He lived nearly all of his adult life in prison and died on August 4, 2016 at the age of 70, apparently having taken his own life. 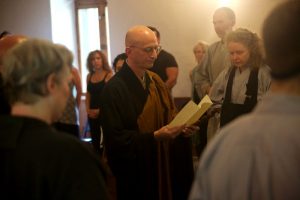 His two daughters, who grew up nearly all their lives while he was behind bars, spoke at his funeral of deep love and the profound pain of a life of separation. They spoke of his frequent letters, and the feeling of his presence in their hearts even though he was forever locked away elsewhere. A fellow inmate who had spent much time with him spoke of the respect and camaraderie he felt with Shido, developed over their years together in prison. And Shugen Sensei spoke of his admiration for Shido in his perseverance to turn his life towards the good and useful, all the way to the end.