A large circle of mourners stood around the fresh grave and a neat, wooden marker. Shido, whose dharma name means “Way of the Poet,” was laid to rest at ZMM’s cemetery, not far from his mother’s grave and surrounded by pine trees. He had visited this place once when he was alive, decades earlier, when he managed to convince the maximum security prison where he was incarcerated to allow him to attend his mother’s funeral. He once described that day, saying he felt deeply at home at the Monastery, doing full prostrations in the mud at his mother’s burial site, despite being shackled. 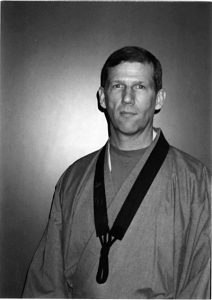 Shido MacKenzie came to our sangha through a sharp twist of fate. In his twenties, suffering from drug addiction, he participated in a robbery where he killed a police officer, Matthew Giglio. Sentenced to 25 years to life, he paid for his crime in various New York prisons—Fishkill, Woodburne, and Greenhaven. While in prison in the early 1980s, he reached out to Daido Roshi with a request to be taught Buddhist practice. Daido began visiting Shido and others in prison at Greenhaven, eventually leading to the formation of the National Buddhist Prison Sangha (NBPS) and to the recognition of Buddhism as an official religion by the NYS Department of Corrections. Shido’s efforts were key to opening this door for hundreds of inmates in New York and other states to practice Buddhism while incarcerated.

After serving his initial sentence of 25 years, Shido was eligible for parole. He appeared before the parole board eight times in the over 15 years and was turned down every time. He lived nearly all of his adult life in prison and died on August 4, 2016 at the age of 70, apparently having taken his own life. Shido’s life and death reveal some of the serious problems with our criminal justice system, which make more poignant the good works to which he ultimately devoted his life.

By his own account, he spent his first decade in prison trying to “beat the system.” He felt sorry for himself and was angry. In 1984, in addition to meeting Daido Roshi, he encountered George Grobe, a former chairman of the Crime Victims Board, who spoke passionately about victims’ rights. He described these two encounters as changing his perspective, and ultimately, the course of his life. “So began” he said, “my journey into [the world of] victims and how they are treated, how they feel, how they are in fact mothers, fathers, brothers, sisters, sons, and daughters—how they are family.” Daido’s teachings complemented and gave life to Shido’s growing awareness of the pain he had caused the family of the man he had killed. Compassion followed.

In 1997, after 15 years of planning and bureaucratic struggles, Shido created the Victims Awareness Program (VAP), a prison discussion group in which men convicted of violent offenses were challenged and supported in their efforts to take total responsibility for their crimes. He once said, “The key to change is taking responsibility. Once your defenses come down and you take responsibility, there is no choice but to be honest.” 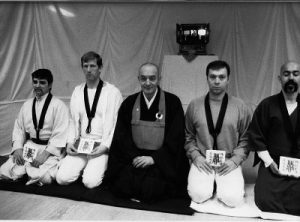 Shido made unsuccessful attempts to contact the Giglio family and regretted that he could not apologize directly to them. Despite his inability to convey his sorrow and remorse to them, VAP presented Shido with unexpected opportunities for healing. In 1998 he invited a speaker to present to the group, the mother of a young man, David, who had been murdered years prior. Shido later said that this encounter reached a part of him which had previously remained untouched. He said “David’s murder had happened many years ago, and she [his mother] was talking like it happened yesterday. I looked at her and I could actually feel her pain. And for a split second, I saw Matthew Giglio’s mother. For years I had been trying to say I was sorry. I started to choke up. I couldn’t say I was sorry to Mrs. Giglio, so I apologized to [this mother].”

This mother and her daughter attended Shido’s recent funeral. They had stayed in touch by mail and weekly phone calls since the time they first met, almost 20 years prior. David’s mother told me that Shido understood something about her loss and was sensitive to it, keeping it at the forefront of his mind whenever they communicated. They were in attendance among many other friends, including people Shido had grown up with and others whom he had met later in life, behind bars. Also present, were Shido’s two daughters, who grew up while he was in prison. They spoke at his funeral of deep love and the profound pain of a life of separation, and of his frequent letters, as well as the feeling of his presence in their hearts even though he was forever locked away. A fellow inmate spoke of the respect and camaraderie he felt with Shido, developed over their years together as sangha in prison. And Shugen Sensei spoke of his admiration for Shido in his perseverance to turn his life towards the good and useful, all the way to the end.