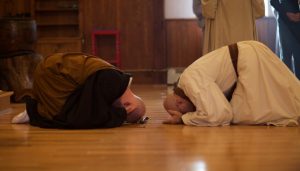 On Sunday, December 11th, Shugen Sensei officiated a Dharma Successor Welcoming Ceremony for Ron Hogen Green, formally marking the transmission of the dharma to Hogen. This brief, simple ceremony was the culmination of the week-long transmission process, held mostly in private in the Monastery’s Buddha Hall. The formal transmission began early the previous Monday morning. Monastery residents saw Hogen offering incense at the altars throughout the building several times each day, as well as officiating services. He also joined the residential sangha for meals.

In keeping with the tradition established by the Fifth Ancestor in transmitting the dharma to the Sixth Ancestor, Hui-neng, in a rice shed at midnight, on Saturday evening during the Buddha’s Enlightement Vigil, shortly before midnight, Shugen Sensei, Hogen and his attendant for the week, Zuisei, met in the Buddha Hall for the final aspects of the private ceremony.

After a special service on Sunday morning to mark the Buddha’s Enlightenment, Hogen entered the zendo and offered three bows to the Buddha, and then to Shugen Sensei. Sensei gave Hogen the transmission rakusu, and offered a few words. Hogen walked through the zendo in a walking bow, to receive the sangha’s support. He then turned to the sangha and offered his vows as a teacher of the dharma in the MRO. 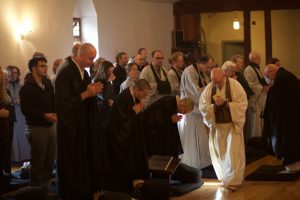 Hogen Sensei began his formal Zen training with Philip Kapleau Roshi in 1978 and first came to Zen Mountain Monastery in 1988, eventually becoming a formal student and ordaining. After living at the Monastery for twelve years as a monastic and serving as the Director of Dharma Communications, Sensei returned to lay life. He currently serves as the Co-Director of the MRO’s city center, Zen Center of New York City in Boerum Hill, Brooklyn, and lives on a farm with his family in Danville, PA.

Here is the talk that Shugen Sensei gave on Sunday, December 11th: