On September 3, in addition to opening the Fall 2017 Ango training period, the Monastery also held a different sort of opening ceremony. Shugen Sensei and Hojin Sensei performed an eye opening for two new images, created specifically for the the main altar in our zendo. 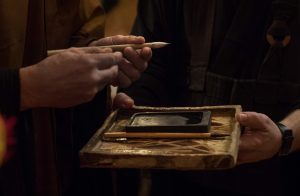 Having featured the Buddha as a solo figure for the past 37 years, the altar instantly became a more dynamic space with the addition of Kannon Bodhisattva on the altar’s right, and Prajnaparamita (referred to as the Mother of All Buddhas) on the left.

But in accordance with tradition, the images could not be considered activated for the purposes of ritual and veneration until ordained priests ‘opened’ the eyes on the carved figures by painting in detail. The installation ceremony was bookmarked by the sangha chanting the Heart Sutra, in which Prajnaparamita is invoked, and the Sutra of Great Compassion, a translation of the Emmei Juku Kannon Gyo. A dedication was also read aloud to commemorate the occasion. 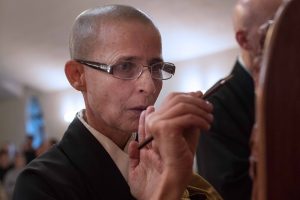 In widening the zendo’s circle of focus to include Prajnaparamita and Kannon Bodhisattva, Shugen Sensei says, we are recognizing the aspects of their individual attributes (non-dual wisdom and boundless compassion, respectively) as much as we are celebrating the feminine. Both figures are classically represented in female form, though Kannon is known to take on a wide range of appearances to suit the time and place. 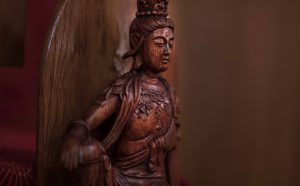 The two statues were created by Nyoman Yuliani, an artist in Bali, Indonesia who also carved the Mahapajapati image that has held a prominent position in the Monastery’s zendo since 2014. Sangha member Daiken Ferrill, who regularly visits Southeast Asia for work, picked up the statues from Yuliani’s studio and transported them by hand back to the Monastery towards the end of August. We are immensely grateful to both the artist and to Daiken for helping to make this vision a reality.

NextThis is the Way I Express My Gratitude