How does a group from various Buddhist traditions respond to the pressing moral issues of our day? How do we bring Buddhism’s practices and teachings to the larger world without proselytizing, and without losing the unique perspective that Buddhism offers? And how can Buddhists, who traditionally eschew political involvement and partisanship, step forward for the good of all sentient beings, at what appears to be a pivotal moment in human history?

The organizers of Buddhist Action Day on February 3 tacitly acknowledged those dilemmas, while asserting that the overriding question facing Buddhism today is not whether to engage, but how.

“I think the debate of whether Buddhism should be socially engaged is over,” said Dharma Drum teacher Rebecca Li, addressing more than 200 Buddhist practitioners—including nearly 30 from the Mountains and Rivers Order—who gathered at Union Theological Seminary in New York City to explore ways to take a more unified public stance on the unique challenges facing humanity, through right action based on the precepts. 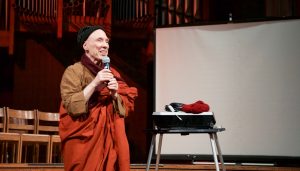 Ven. Bhikkhu Bodhi, one of the conferences organizers. (Photo courtesy of Lion’s Roar)

“There’s a widespread attitude among Buddhists, and I think especially Western Buddhists, that politics is something to be avoided, a kind of detour from our spiritual quest,” said the Venerable Bhikkhu Bodhi, one of the organizers. “We’re seeking spiritual purification, enlightenment, awakening, liberation—and to get involved in political issues, issues of public affairs, that is a distraction—a falling-away from our spiritual aspiration.

“But the way I look at our situation today, politics—though it’s corrupt, dirty, divisive—it’s also the field where the great moral issues of our time are being debated and decided,” he continued. “The issues of racism, protection of immigrants, dealing with the climate crisis, all of these crises coming together—they have deep, compelling moral dimensions.”

Our times call us to clarify “the confusion that Buddhism is something that we do in silent meditation halls only, for our own enlightenment,” said Greg Snyder, Senior Director and Assistant Professor of Buddhist Studies at Union, and another of the day’s organizers. “What is integral to it is our ethical engagement with society, and that ethical engagement is integral to our own awakening. Those two things cannot be pulled apart.” 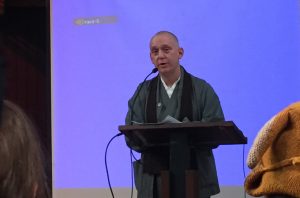 Greg Snyder, another organizer, said “Our ethical engagement is integral to our own awakening. Those two things cannot be pulled apart.”

In opening remarks, Snyder addressed the question of why this was happening now, when strife has been a part of human existence since long before Gautama placed himself under the bodhi tree.

“For one thing, we’ve been asked,” said Snyder, also a priest and co-founder of the Brooklyn Zen Center. Requests for guidance have come from sangha members seeking to step forward, and leaders of other faith traditions have been asking, “How do we bring in Buddhists in a larger way?” he said.

He began the day by acknowledging that we were on the traditional territory of the Lenape, Native Americans who had lived here for millennia before Europeans arrived. “I feel that it’s important that we honor the contributions to human life, we honor the guidance to our relationship to our Mother Earth, and actually we honor also the ideals around [Haudenosaunee] Confederacy that became the backbone of the democratic principles that we’re actually defending here today—or protecting and trying to expand to this nation.”

The day was about exploring questions, Snyder emphasized. “How are we going to understand ourselves as self-identified Buddhists with attitudes, practices, teachings, worldviews, that make the presence of Buddhism meaningful, and even necessary?” he said. As Sensei Angel Kyodo Williams added later, it is our responsibility to take action as people who have chosen this path.

Buddhist teachers, sanghas and traditions from all around the New York area were present, including Shugen Roshi and sangha members, Roshi Pat Enkyo O’Hara of the Village Zendo and Sharon Saltzburg. Angel Kyodo Williams Sensei addressed the group via Skype.

After opening presentations, participants divided into dyads to explore preliminary questions: What would the room have to contain in order for us to feel safe? What did we hope to accomplish?

Like pebbles dropped into a pond, the interactions rippled outward as each dyad chose another, to make groups of four, and later doubling in size to form groups of eight. After a lunch break, participants returned to their eight-person groups and worked through the afternoon to expand the inquiry. Groups explored what such actions might look like, what they might need to have in place in order to move forward, and how they thought social action could be enacted. 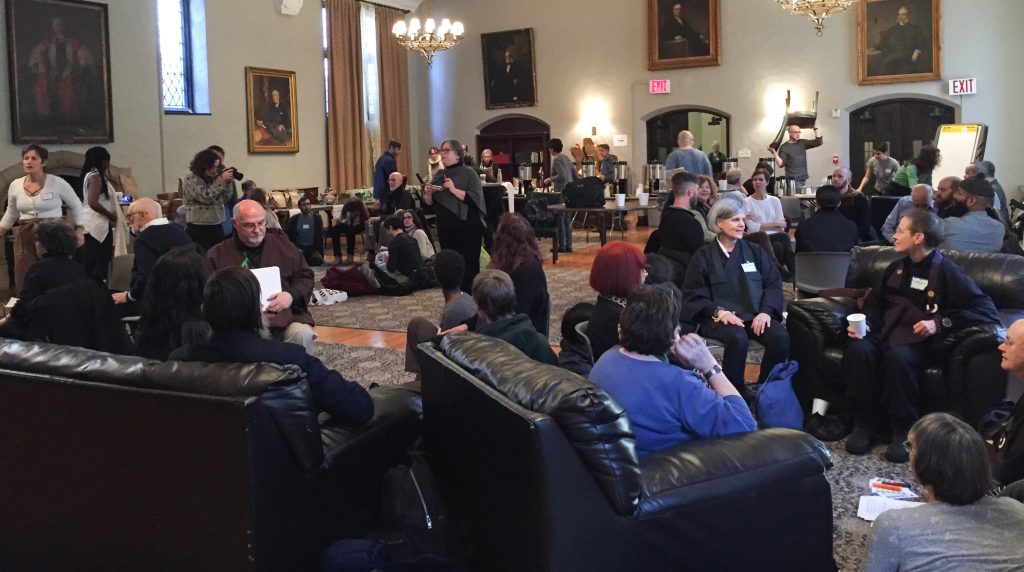 The day offered both structure and fluidity, as people who had never met attempted to establish bonds to sustain each other in difficult terrain. At each stage, they recorded on poster-sized paper a distilled version of what they had talked about. At the end of the day everyone did a walkthrough to see what the others had come up with.

Many common themes emerged, including bringing Buddhist understanding to the broader movements, emphasizing stillness and equanimity; building bridges among Buddhist traditions with different histories, communities and relationship to the work; connecting with and being visible to one another.

Suggestions for concrete actions centered around building on the day’s work to continue communication between the various Buddhist groups; creating liaisons with already organized campaigns and organizations; providing concrete support to families and others affected by policies; providing access to retreats, and bearing witness—simply listening to people’s stories. The need to be open to having uncomfortable conversations also surfaced. Lastly, the array would not have been complete without a Joy list, topped simply by the word Glitter, and involving things like making a papier-mâché Buddha and convening flash mobs of “just sitting.”

The mutual support that such cooperation could bring was also a source of strength, something many in our sangha had explored in its Dharma Action Day the week before on January 28 (with a second event at the Temple on February 25). At the Monastery gathering, nearly 100 sangha members explored ways to marshal our collective concern for the world and channel it into actions of benefit. They learned about social, racial and environmental justice efforts already under way and had space to explore the question of whether, and how much, to get involved. 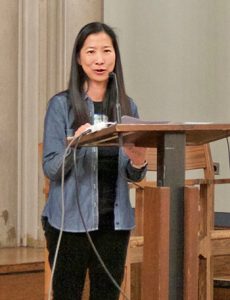 Indeed, even Li in her rousing introductory remarks acknowledged the delicacy of wading into activism.

“How are we going to engage politically without being sucked into the culture of divisive speech, the mental habits of demonizing those with whom we disagree, and developing rigid views that stop us from listening to each other—practices that are so pervasive in the realm of politics today?”

At the end of the gathering at Union Theological, many groups suggested meeting again, possibly in a daylong retreat. Union, as Snyder noted, wants this to be the beginning of a relationship with the Buddhist community, rather than a one-time event. And the larger goal, said Bhikkhu Bodhi, was to build out from the local level and “try to generate a number of nodules around the country which will eventually join together into a national coalition.” 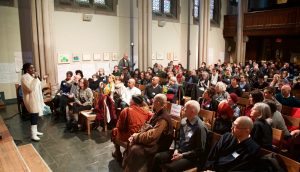 At the end of the day, Snyder expressed optimism.

“I feel like this is the very beginning,” he said afterwards. “But I think what happened in this room was trust. This community—the people here today built, and are leaving with, trust in each other and this process.”

And what about people who are not interested in pursuing social action, or who feel that doing so veers too far into partisanship and politicization? Might they be alienated? 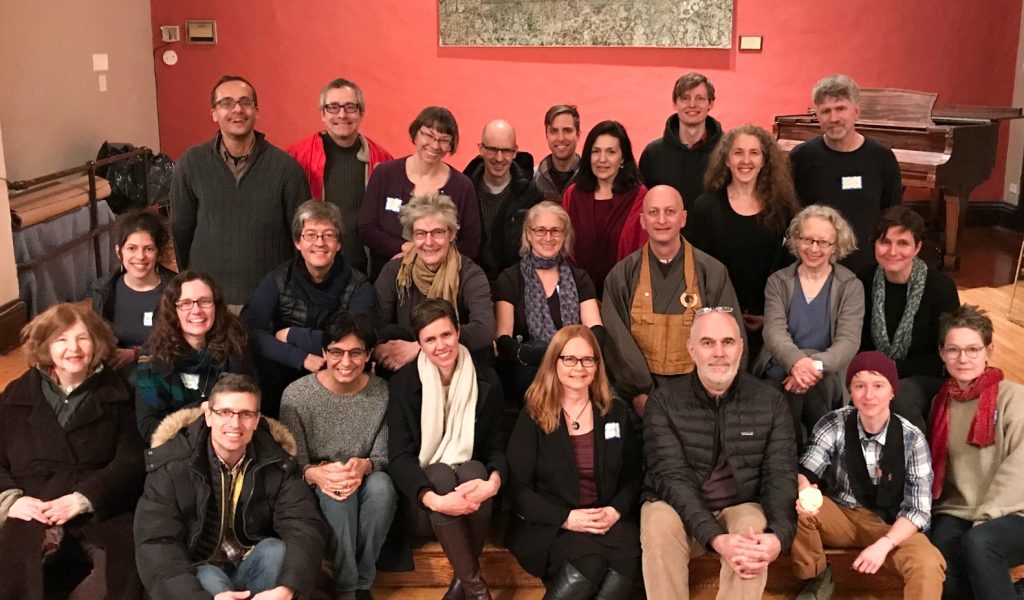 Close to 30 members of the MRO sangha attended the event.

Theresa Braine, MRO, is a freelance writer living in NYC.