Attending a Buddhist festival in 1974 for me had many blessings. My two year old son was being cared for by dear friends, the drive to Boston with my husband John was sunny and pleasant, and the free admission to an education center was exciting. After participating in a meditation and lecture with Eido Roshi all morning, I was ready for a nap. The Japanese Tea Ceremony demonstration was at 2 pm so when I arrived early, I sat in the middle of the first row, closed my eyes and drifted off.

The sounds of people chatting and testing the microphone woke me. The stage was set as a Japanese tea house with screens, mats, flow- ers, calligraphy, and simple artistic placement of unfamilar objects. A strikingly handsome Japanese man in black robes walked up to a microphone at the right corner. He introduced himself as Hisashi Yamada, director of the Chanoyu Society in NYC. He informed us that what we were to witness was a formal Japanese Tea Ceremony with green powdered tea served by a host to a guest. A kimono-clad Japanese woman walked out slowly on the stage, knelt down, looked at the calligraphy and flowers, then stood and walked to a spot on the tatami. A moment later, the corner shoji screen softly slid open and another kimono-dressed woman came through. They placed little fans in front of them and bowed together. One remained sitting quietly while the other proceeded to carry in jars and bowls, opening the screen, turning, kneeling and closing the door each time. It was mesmerizing—the preparation of the green powdered tea done in a precise style totally unfamiliar to me. The guest drank the tea, observed the bowl, returned it, and the process started again, carrying everything out, opening the screen with each item, closing the screen, bowing to each other. Hisashi Yamada, who had been standing silently at the podium, smiled and said, “Now I will tell you what you just witnessed.”

Each detail, explained with grace and elegance, had me hooked. I stayed after the curtain was closed and went back stage to meet them. I needed to know how I could do that, serving tea in silence. What a wonderful thing to offer. Within days I had made an appointment for a lesson in NYC. Somehow I figured out how to get there from Cochecton NY, about four hours away, and figured out how to pay for lessons too.

John continued to study with Eido Roshi at Daibosatsu and received a rakusu with the dharma name Daido. Through Eido Roshi we were invited to attend a summer at Naropa with Daido teaching a photography program while I also attended a few chado lessons. It was there we met Maezumi Roshi. Daido spent evenings with him, talking late into the night. Two weeks later we were offered a position at ZCLA with Daido to organize a publishing company and me to head up the child care program.

The first year at ZCLA was challenging, our son newly diagnosed with a malignant brain tumor, having surgery and extensive radiation. We attended a new program being offered through the hospital at the Center for the Healing Arts with Dr. Brugh Joy and RN Edith Sulwold. Our son, Asian, received additional treatments and therapies. It was life changing for the three of us. One of the saving graces for me in those early years was caring for all the participant’s children during sesshin each month, sometimes as many as fifteen kids. We would spend our days at the Santa Monica beach and playgrounds.

During those years at ZCLA I attended weekly lessons with Sosei Matsumoto, a tea master. After four years I received certification to demonstrate and teach beginners. In 1979, when Maezumi granted Daido permission to search for his own place to teach the arts and Zen in upstate New York, Maezumi said, “Will you help Daido, Yushin?” I immediately said yes!

It didn’t take long for Daido to find the monastery in Mount Tremper. As we walked up the drive I said, “And just who do you think is going to clean this big, old house?” But, having learned a lot in the areas of fund drives and bank loans, I was able to help as my life of “service” continued. 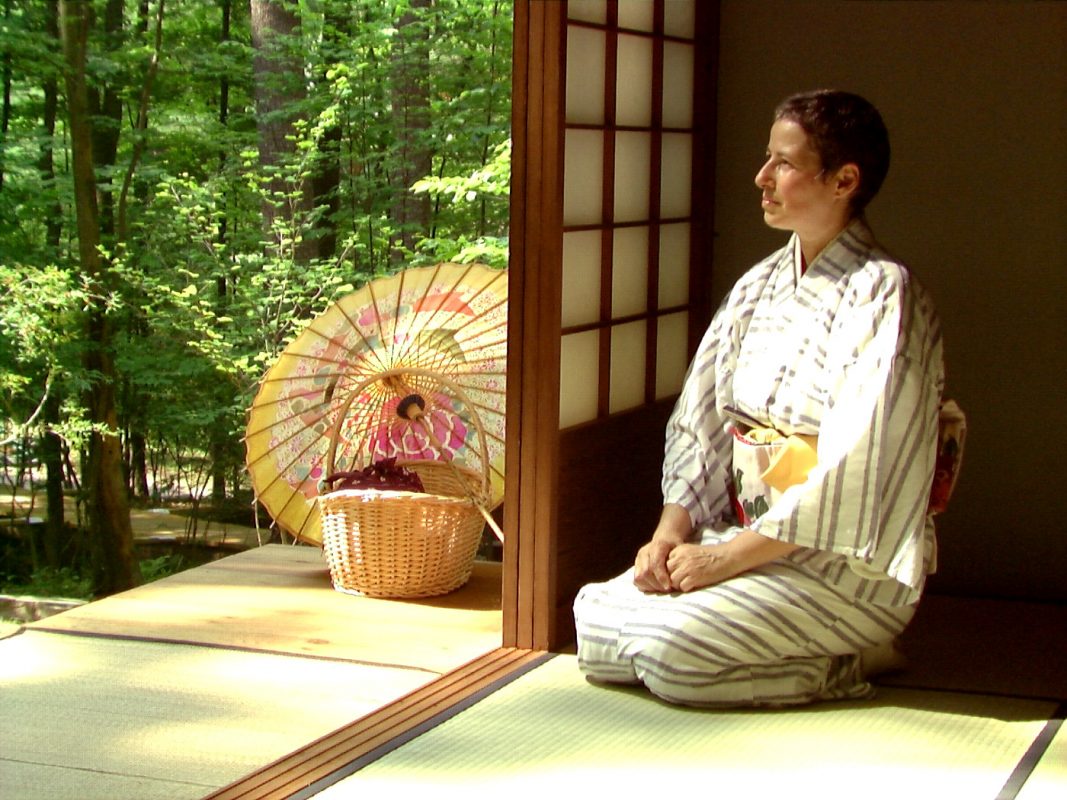 The first few months of starting the Zen Arts Center was a huge challenge for the handful of us. The buildings were in shambles, gardens overgrown, water undrinkable and infested, no heat, barely electricity, and filth everywhere. And yet, Daido saw a beautiful future for us.

There was a small red cabin just beyond the garden designated for me as a tea house. It had electricity, a small pipe with running water, a window and sweet little door, and fortunately a large tree had fallen over the ravine which made it possible to slowly and carefully walk to the cabin.

The first chado program was announced and happened on a warm sunny weekend in late spring. Six people registered and arrived that Friday. One of the women arrived using two canes, both legs in white casts from her knees to ankles. A black cloud floated over my head; however, she smiled and courageously maneuvered herself very well to the dining room and then up to the dorm and zendo. She even straddled the log and inch by inch made it across. Afterwards, I firmly demanded a bridge be built and it was finished a few months later.

For the first three years at the Monastery I continued the study of chado and offered a program three times a year. We held them in every corner of the campus—the little red hut, the Buddha Hall, the dining room, under the pines and once in an empty A-frame— a “have tea will travel” life. I was happily surprised when people came to participate, enjoyed themselves, and got connected to the practice of Tea and of Zen. I remember a group of five men coming together, physics and chemistry professors from Cornell University. They fell in love with Daido and barely tolerated the intricacies of Tea Ceremony. Many other people came, and one of the students from a photography school became a staff member. He loved the practice of the Tea Ceremony and often joined in our weekly lessons. That was Kimball, and he eventually built the tea house we currently have on campus.

In about 1988 Kimball and I were asked to participate in a Japanese festival in Middletown, Ohio and to construct a little house for demonstrations of the Tea Ceremony. We saw it as an opportunity to expose many new people to the tea practice, much as I had encountered chado in 1974. The house, with the flooring of tatami, the doors of shoji, was erected on a little knoll under pine trees, with only three sides to allow for viewing the demonstrations. Outside were two large sets of bleachers for the audience. During the festival, over ten thousand people passed through, and we offered tea demonstration six times each day, serving as many as wanted.

A week later Kimball and his dad dismantled the tea house, put it on a flat bed truck, drove it to Mount Tremper and reassembled it at the Monastery. Eventually we had a traditional opening and naming ceremony. Kaz Tanahashi and Daido gave the naming a great deal of thought. The house became Wako-an (“Turning Towards Harmony Hermitage”). Wako-an continues to be used for chado retreats, demonstrations and programs to this day, receiving a new roof and further loving renovations along the way.

We gingerly arrived at the Zen Arts Center with copies of The Three Pillars of Zen under our arms, a desire for community and a dream to return to the land. Most of us came from the beatnik/hippie world of artists, musicians, dancers, poets, spiritual seekers and lovers of the natural world. We were ready to farm, bake bread, rise at dawn and make our art. Daido Roshi promised to teach us Zen Arts and how to meditate and find our true selves. He offered us life in this beautiful place with its breathtaking mountainous landscape. A-frames and cabins high on the hill offered no water, insulation, plumbing or electricity. All roofs leaked and floors creaked. The main building was being heated mostly by the giant fireplace in the dining hall. Steam would come through our chattering teeth during morning and evening zazen.

Little money was available and all renovations were done by the small, inexperienced staff. A flexible pipe was jimmy-rigged from a stream two miles up the hill to bring water down to the Monastery building, requiring constant vigilance for leaks in the summer and frozen pipes in the winter. When the pipes broke, our water came from a spring about a mile up the road; filling bottles was a caretaking activity. Our bookkeeper juggled the books and our ingenious Tenzo gathered discarded food from the local supermarket to create a never ending assortment of rice and veggie dishes.

We slept in bunk beds left by Doshinji’s previous occupants—summer campers. Maezumi Roshi, the first abbot of Doshinji, sent us monks from Los Angeles to help us in our training. He also came from across the country to offer his magical Zen teaching and guide us in the rituals and discipline of ancient Buddhist practice, completely new to us.

We were visited by dignitaries from Japanese monasteries. Thich Nhat Hanh came, along with the Buddhist Peace Fellowship, to lead two workshops. Calligraphers Kaz Tanahashi and Jikihara Sensei taught us brush painting, and we studied and played the Japanese bam- boo flute with world renowned flute master, Watazumi Doso. We were fortunate. Our lives were challenging on many levels, but it was an exciting, pioneering time. We were learning a whole new language and way of living.

To help with our growing debt and fulfill our promise for right-livelihood, Daidoshi conceived of Bazaar, a cafe and upscale grocery in the heart of Woodstock. A decrepit store was acquired and impressively and elegantly renovated by Doshijni staff. A Zen eatery, frequented by locals and tourists was established. Everyone was put to work. Our resident Japanese monk cooked hot sesame noodles in the open kitchen.

We did it all. Students stayed every night after closing time to scrub down counters and floors and close the register. We worked on Sundays. We missed retreats. Napping became popular during zazen. Bazaar was successful but the work turned out to be far too much, and not what this small but willing group of people had signed up for. Bazaar was closed and the sangha happily returned to full-time spiritual practice in the mountains.

Doshinji is today is a testament to Daidoshi’s unrelenting vision for this wonderful place of practice, and the hard work of his students in bringing it to fruition.