As I spent time at Dai Bosatsu, I began to suspect that the key to the profound qualities I was seeing in Zen art was Zen practice, and that zazen— Zen meditation—was its foundation. I had heard that as a young man Soen Roshi used to sit zazen high up on a tree to train himself not to fall asleep. It was said that once, when Soen was sitting at Dai Bosatsu Mountain in Japan (for which the monastery is named), he fell out of a tree and his head was pierced by a sharp piece of bamboo. Yet this incident didn’t stop him from sitting.

During an intensive meditation retreat at Dai Bosatsu, I witnessed Soen Roshi’s amazing capacity to sit perfectly motionless in zazen for long periods. I saw him sit through the day, into the night and then on through the next day. Curious, I got up in the middle of the second night to see if he had finally gone off to rest, but there he was, still sit- ting in the empty zendo. Peter Mattheissen, in his book Nine-headed Dragon River, wrote that when he was assigned to clean the zendo for work practice, he sometimes had to dust around Soen sitting in meditation.

Soen’s capacity was extraordinary, to be sure, but the power of his meditation wasn’t confined to the zendo, or the zazen posture. Soen’s stillness when he sat was no different from the stillness that preceded his brush strokes when he created a calligraphy. His every movement was poised, centered, completely present. This stillness and depth was also present in his poetry, which earned him the honor of being considered by many to be the Basho of the twentieth century. One of Soen’s haiku reads:

When Soen Wrote a poem or did calligraphy, I could see his whole being shift. He became very quiet, motionless, and I could feel the same stillness descend on me as I watched. Though what I saw in front of me was just a Chinese character, each time I felt as if the piece of art was all there was to see. It filled the universe. Soen disappeared, I disappeared. There was no longer any separation between the art, the artist and the audience. It was a familiar feeling, similar to the time I had spent with my tree.

While I studied with Soen, I kept working on the slideshow of the monastery, and when I finished it I showed it to him and the rest of the community. Millie Johnston, a wealthy art collector involved with various Buddhist groups in the United States, was in the audience. She suggested that I get in touch with Trungpa Rinpoche and offer to teach photography at his new university, Naropa, in Boulder, Colorado.

I was given the job and traveled to Colorado to teach a summer course. One morning shortly after I arrived, I was sitting out on the balcony of my apartment when I saw the university staff moving furniture into the apartment next door, recently vacated by a professor of Hinduism. One of the movers was carrying several Japanese scrolls.

“The Hindus are out. The Japanese are in,” he said.

“Taizan Maezumi, a Zen master from Los Angeles,” he replied.

When Maezumi Roshi arrived, I went next door to pay my respects. I introduced myself and told him I was studying with Soen. That evening, one of his senior monastics knocked on my door and said Roshi wanted to invite me over for a dinner of Kentucky Fried Chicken and sake. I went with him and discovered a full-blown party. For some reason, Roshi took a liking to me and insisted that I stay beside him through the evening. As we sat together, an unusual encounter ensued.

“Daido,” Maezumi Roshi used the Buddhist name that Eido had given me.

Roshi turned his head away and was silent. Leaning close again, he said, “Daido, tell me.”

“Tell you what, Roshi?” Again he turned away and was silent.

This went on for hours. At one point, I surmised that what was happening was a classic dharma encounter that required some kind of a Zen response on my part. So the next time he said, “Tell me,” I lifted the glass of sake to my lips, took a swig and said, “Aaaaah!” slamming the glass on the table. I looked at him. He made eye contact with me, and with an impish grin, pinched his nostrils together, turned his head away and made the sound, “Phew!”

Some time around two in the morning I finally convinced him that I had to leave. I began cleaning up the mess we’d made, but he stopped me, said it wasn’t necessary, and pushed me out the door. I was surprised and disappointed that a Zen master would leave such a mess, but I was also exhausted, so I let it go. I went back to my apartment and lay down on the couch in my living room, not wanting to wake my wife. I had barely drifted off to sleep when there was a knock. Maezumi Roshi stood at my door, wide awake and immaculately dressed in robes, his head freshly shaven. “Roshi!” I exclaimed.

I followed him back to his apartment. The place was spotless. The low table in the dining room had four bowls and the implements for a formal tea ceremony. “Come,” said Roshi, gesturing for me to sit down. “We will have tea.”

He spooned powdered tea into a bowl and whisked it into a froth. “Soen Roshi,” he said, placing the bowl before one of the empty seats. He repeated the process and put that bowl in front of the other empty seat, saying, “Yasutani Roshi.” Yasutani was Maezumi’s teacher, who had recently passed away. The third bowl he presented to me. Finally, he whisked one for himself.

The moment I touched the bowl to my lips and took a sip of tea, I felt something piercing, like a long skewer moving through all space and time. It skewered Minor White, Eido, Soen, Maezumi Roshi and, finally, me. I was so moved, tears of grati- tude filled my eyes. Embarrassed, I glanced up and saw that Maezumi Roshi, too, had tears rolling down his cheeks.

I put the bowl down and through my tears watched Roshi as he completed the ceremony. Wanting to express my gratitude somehow, I stammered, looking for the right words, “Roshi, I—” he covered my mouth with his hand, grabbed my elbow and led me to the door. “Roshi—”

“Sssshhh,” he said. He gently pushed me out the door and closed it behind me.

For The Rest Of Maezumi Roshi’s Stay at Naropa we had no contact. I attended his talks, but he acted as if he didn’t know me. The last day, when he was ready to leave, Roshi came to say goodbye. I bowed and thanked him. He looked past me at a scroll of Soen Roshi’s, “Namu Dai Bosa,” hanging over an improvised altar I had set up. He turned to me and said he wanted to offer incense to Soen Roshi. “But it’s only a silk screen copy,” I said. “It doesn’t matter,” he said in a gruff, slightly annoyed voice. He offered incense, bowed to the scroll and then to me. He left, and I stood on the balcony watching him until his car was out of sight. 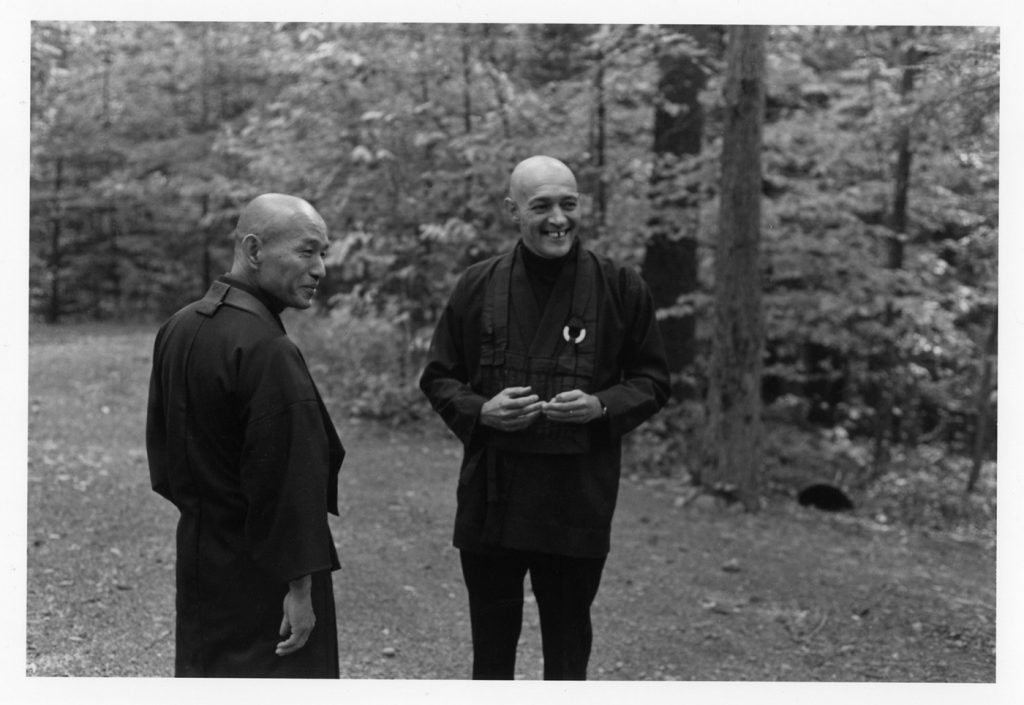 From The Zen of Creativity: Cultivating Your Artistic Life. Copyright © 2004 by Dharma Communications. Reprinted by permission of The Random House Publishing Group.