On Sunday, June 18, 2017, Shugen Sensei completed a process of dharma transmission to Jody Hojin Kimmel as a large gathering of sangha shared the moment. Denbo, the actual transmission empowerment, took place—in accord with tradition—at midnight the evening before without witnesses. Dharma transmission is an intimate expression of the student meeting the teacher’s understanding and conveyance of the Dharma. Hence it is referred to in Zen as a direct mind-to-mind transmission, beginning with the Buddha and his student Mahakashyapa and onward through the ages. 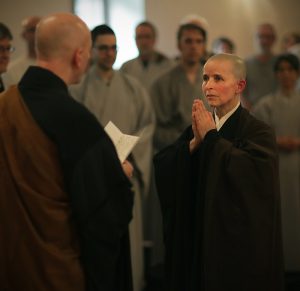 For Hojin Sensei, this training had formal beginnings when she entered residency at the Monastery in 1990 and began studying with Daido Roshi. In 2007, Daido Roshi recognized her as a dharma holder, indicating his intent to transmit the “mind seal” in due course. After his passing in 2009, Hojin continued her studies with Shugen Sensei, receiving denkai—the transmission of the precepts—in 2012. 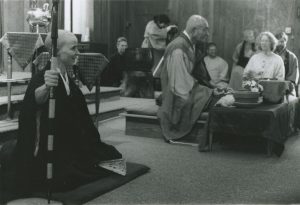 Over  the week leading up to the transmission ceremony, Hojin engaged in full time practice and contemplation in order to prepare for this rite of passage. She and Shugen Sensei both spoke about this work during a talk given later Sunday morning. These practices included making offerings at various altars throughout the Monastery’s main building, as well as performing services for both the male and female ancestors, thus further enriching her deep relationships with the lineage and with the Monastery. 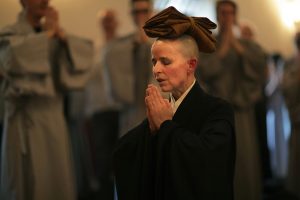 Chanting the Verse of the Kesa.

In seclusion, she also worked on copying kitagami, oral teachings given over many generations, and along with Shugen Sensei created the transmission document.

As was the case with Ron Hogen Green, Sensei, earlier this year, Hojin Sensei will now begin taking on her own formal students as she continues her role as teacher and co-Training Coordinator within the Mountains and Rivers Order.

Sunday was a joyous and emotional occasion for the sangha and many well wishes were sent in from near and far.

As our new Sensei said in her address, “I ask for your guidance. I rejoice in your virtues and the virtues of all things. And I offer any virtues that I have.” 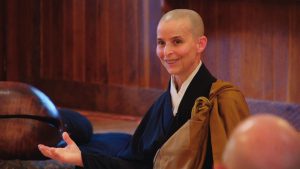 Hojin addressing the sangha on Sunday.

As many of us know from her years of dedication and generous teaching, those virtues extend without measure.