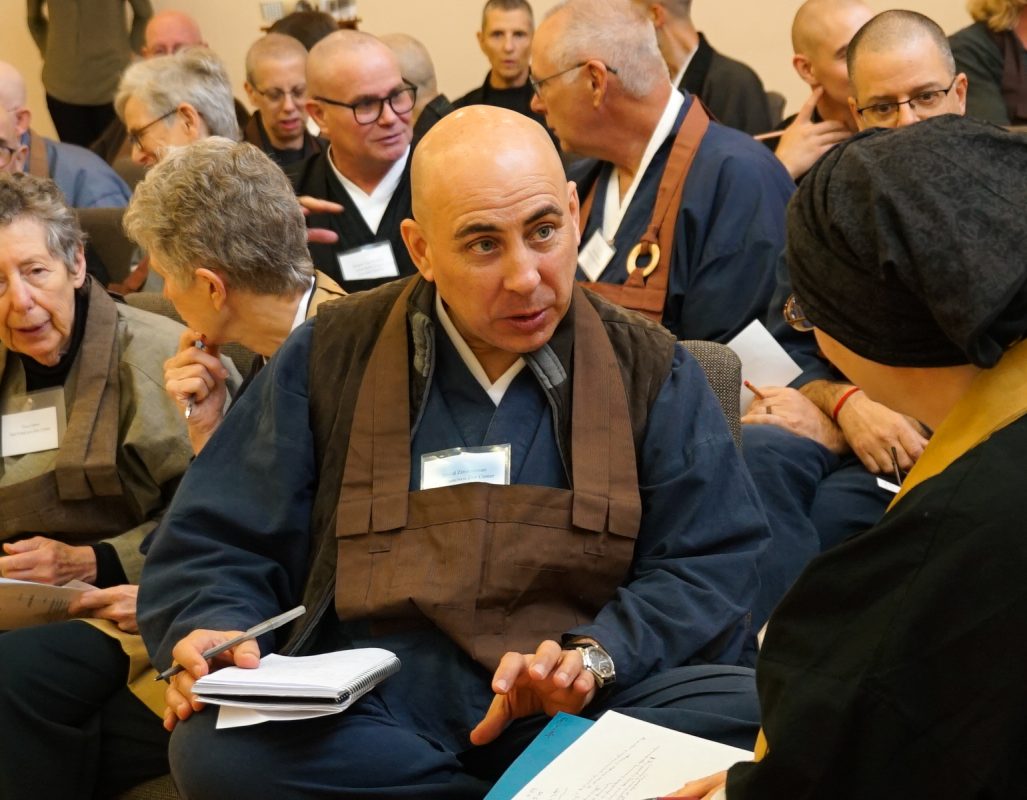 SZBA was first established in the 1990s as a way to bring disparate individuals together who are living out some of the same vows, with much of the same cultural inheritance, and facing many of the same challenges. With close to 300 members, an engaged board of directors, and an active member listserv, the organization also functions as a platform for aligned Soto Zen priests to take a public stance on topical issues.

This year’s conference was designed around the theme, “Interconnecting: One Soto Zen, Many Expressions,” and its intention was to identify and expand upon those connections that go beyond the already represented group. Many participants brought their concerns about how to make their practice centers more accessible and equitable. There was a strong imperative to look closely at the ways that Soto Zen Buddhism has, in fact, perpetuated patterns of exclusion, sexism, and entitlement that have been passed down over the years; a karmic inheritance that traverses borders but includes American colonialism and Japanese chauvinism.

To meet these concerns head on, the conference featured a number of exciting and challenging talks and breakout discussions. Dr. Ann Gleig, Associate Professor of Religion and Cultural Studies at the University of Central Florida, gave an insightful keynote address on the inherent strands of racism in modern Buddhism communities. 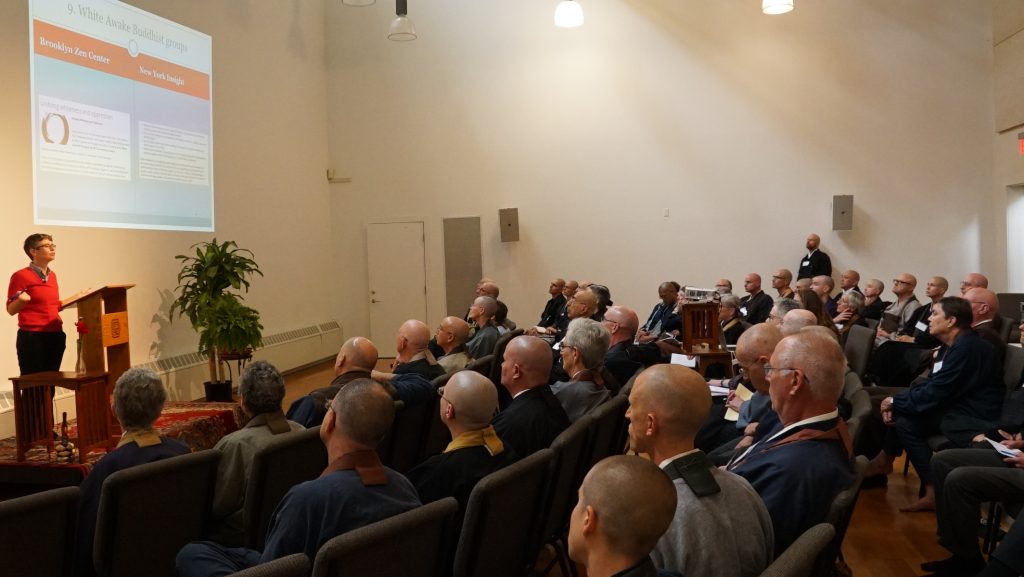 Another featured speaker was Thomas Bruner, a sought-after business consultant who is also a jukai student at Dharma Rain Zen Center in Portland, Oregon. Bruner skillfully walked attendees through the results of an SZBA survey that had asked members to report on the diversity of their sanghas and their efforts—or at least interests—in serving broader populations. He then made a series of recommendations for sangha leaders who are interested in examining how they can become more open and proactive in this regard. Unsurprisingly, the work starts with getting teachers and students to engage in studying their own biases and in taking responsibility for any harm done in the past and reenacted in the present. 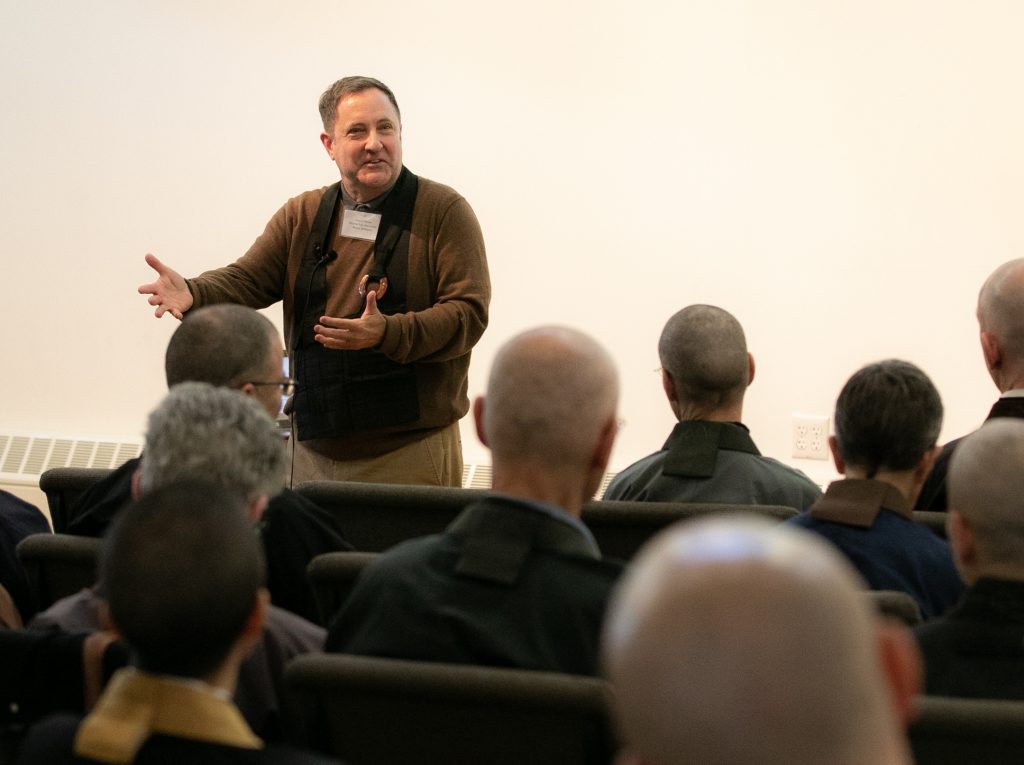 Thomas Bruner presents findings from the survey of Zen centers and sitting groups.

A number of other presentations and group discussions provided opportunities for some of the priests in attendance to share efforts they or their communities have already taken up. It was striking to note that many of the modalities discussed in these forums would have been unfamiliar to previous generations of Zen practitioners, and might have even seemed superfluous given the traditional focus on zazen and strictly adopted forms of Buddhist expression. Some voices on the landscape of contemporary Buddhism might still have difficulty with modifying the roles that clergy members and temples have traditionally played. Nevertheless, the overwhelming majority of conference attendees were enthusiastic about facing the challenges that our times are offering to us and glad to share in conversation with colleagues who are elsewhere along the path. 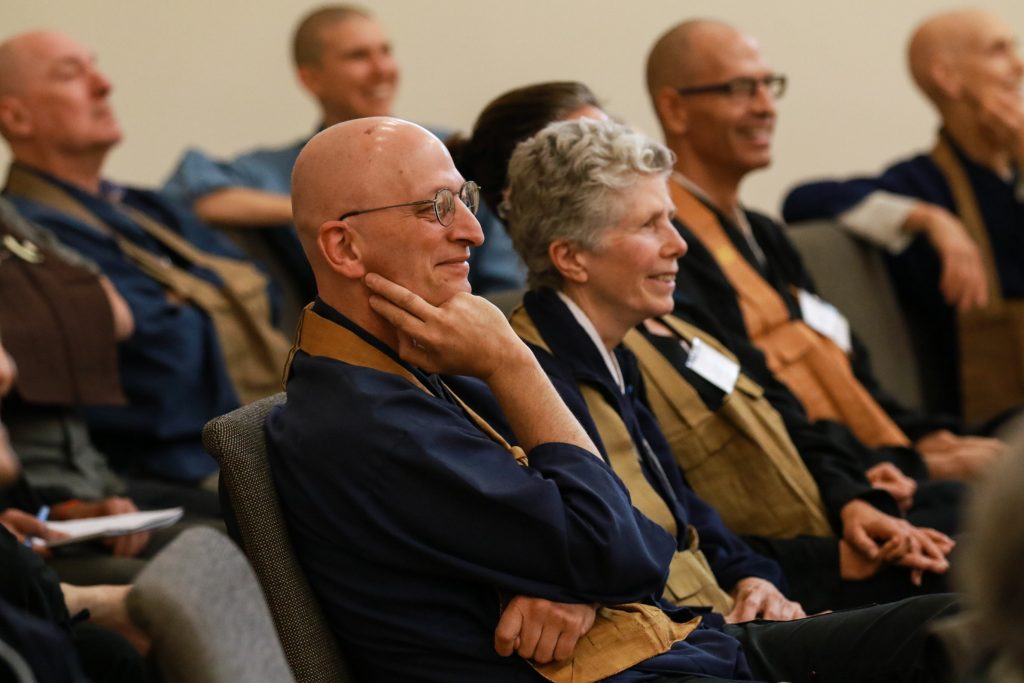 Shugen Roshi and Chozen Bays, Roshi, listen to one of the presenters.

One of the most powerful events in the program was inspired by the #metoo movement. On Friday evening, participants sat together and shared stories of what they have witnessed or experienced during their time in training. These discussions, taking place in two separate spaces according to gender identification, allowed those present to address the silence and shame that can all too often afflict spiritual communities when sexual abuse is even whispered about.

On Saturday, towards the end of the conference, all participants joined in the Monastery’s zendo for a renewal of vows ceremony and to formally welcome new members to the SZBA.  The fusatsu ceremony incorporated a statement of atonement, written by several male SZBA members, expressing an acknowledgement of past wrongs against women, people of color, and other often disenfranchised groups.  The statement (posted in full below) concludes with a clear intention: “we bow in reverence, sorrow, and determination to overcome and heal the forces that cause such pain, for ending suffering within and without is the Dharma’s true Gateway, the Buddha’s True Heart.”

The conference was officially only open to SZBA members and associate members, which included ordained MRO monastics. That said, several talks and events were made open to all Monastery residents who gladly used the opportunity to better familiarize themselves with the ways in which Zen priests make their way in the world, including those now living outside the cloister of a training center. Residents, in turn, worked enthusiastically to produce a sumptuous banquet-style meal that concluded the conference.

All told, it was a rich experience for all involved.

The SZBA Statement of Recognition and Repentance:

Gathered here today as Zen Buddhist priests and custodians of the dharma, we pledge to face, acknowledge, understand and hold the weight of our collective karma so that we may practice and teach with clarity, vulnerability, and honesty.

With heavy hearts, aware of our own complicity we understand:

That across time and culture men have harmed and dominated women, creating patriarchal cultures of fear. Buddhist and Zen culture have been as guilty of this as any other, sometimes even distorting the teachings to allow for such misguided power to be wielded.

That we in this moment and in this very place stand on sacred ground of indigenous peoples that has been stolen from them and with cruel deception and religious doctrine maintained as if a right of those who have taken it. Our nation has capitalized on this theft, and their internment and genocide— a theft that continues as indigenous peoples remain unacknowledged and uncared for by a cruel social system they had no hand in shaping.

That the colonization of what we call the Americas, and the rise of the United States as a global power, rests upon the enslavement of African people taken violently from their homes and forced to labor under brutal and oppressive conditions.

That we as individuals and communities live in a world in which some, only because of the color of their skin, are accorded social and economic privilege. We recognize the willful blindness that upholds this privilege, as well as the indignity and pain of systematic oppression, exploitation, enslavement, and deportation of those whose skin does not accord them this privilege:

We atone for the suffering caused by racism in all its forms, and vow to dismantle the white supremacist systems that maintain oppression, including mass incarceration and the deportation, persecution and exclusion of refugees and immigrants.

That we as individuals and communities, have treated people with disrespect, cruelty and violence because of their sexual orientation and gender identity.

That we as individuals and communities are complicit in an unfair, classist economic system that divides humanity into winners and losers, exploiter and exploited, and that encourages selfishness and conflict.

That as human beings, we cannot separate the gift of our own existence from the violence being done, through short-sightedness, greed, and self-importance, to our planet and the many beings with whom we share it.

As individuals, as a sangha, and on behalf of all who came before us, we atone for our participation in all systems that perpetuate domination, violence, greed, disrespect, and unfairness. We pledge ourselves to overcoming these forces in ourselves and in the world for the benefit of all sentient beings, victims as well as perpetrators.

Now as we chant the verses of repentance and renew our vows in the Full Moon Ceremony, we bow in reverence, sorrow, and determination to overcome and heal the forces that cause such pain, for ending suffering within and without is the Dharma’s true Gateway, the Buddha’s True Heart.