It was over a year ago that I left the Monastery after a three-month residency. It was the last day of Spring Ango and Shugen Sensei offered a Dharma Encounter. When the line opened, Shugen said, “Shoan will lead off.”

During the service, she had chanted “…the Buddha turns the dharma wheel…she liberates all suffering sentient beings…” My brain glitched a bit, but I was sure it was just a version I didn’t know . Shugen Sensei addressed her pronoun transgression with some tough love, ultimately concluding that he didn’t disagree with the reasons behind her choice, but she should have consulted him before altering liturgy.

From my perspective, that was the beginning of some feminist changes at the Monastery. There is now an extended list of women ancestors. Hojin Osho sits next to Shugen Sensei. The Identity of Relative and Absolute no longer reads “northern or southern patriarch,” but simply: “ancestor.” Small things, but enough to bring a tear to my eye the first time I heard them.

I attended Wild Grasses at the urging of several female monastics, one of whom described it as “the most special room in the house.” I peeked in as the Zendo was being set up on Thursday and grinned. Of course the cushions would be in concentric circles instead of straight lines. Of course the green carpet was gone, opening up a space between the two sides and making it feel more open and welcoming.

During Open Sozan, several women shared the feeling of being held, as in a womb, and the supportiveness of sitting with other women. And when Hojin Osho described the experimental oryoki method that would allow us to all eat together, I thought, Yes, of course. 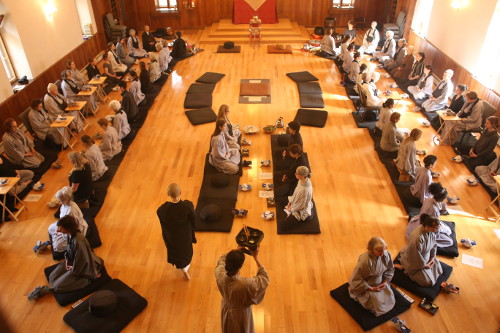 It was a little messy at first, but we figured it out. We brought all the food into the Zendo and passed it along and, I have to admit, I loved the mild chaos in a usually rigid space. We all ate; we made it happen together. When there is work to be done, whether dishes or caretaking, women just do it. There is not a lot of fanfare or the weird competition I sometimes feel when men are around. We’ve been doing this for thousands of years. It’s in our bones.

I’m not often in women’s-only space, but when I am, there is a distinctive feeling of safety and freedom. It’s subtle, but powerful. It makes me realize that the rest of the time, I exist with a slight contraction—a self-protective feeling that I don’t notice until it is absent.

At 5pm on Thursday, the men were asked to clear the building, and I felt it immediately: a spaciousness, a sigh of relaxation. I wasn’t the only one. In her Friday talk, Zuisei described a similar feeling and that she had shared it with Shugen. He’d said to her, “That’s great. And it sucks.” It’s great that we can create a safe space, and it sucks that we need to exclude men to do it. While we may feel safe with and supported by our Dharma brothers in the Sangha, many of us are survivors of abuse and violence at the hands of men, and all of us live with the consequences of a patriarchy still alive and well in this country. 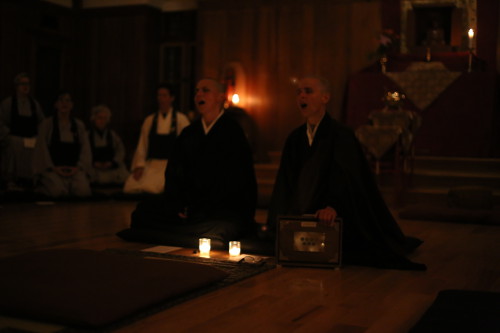 The first night we were all together, we entered for the evening periods of zazen and were told to face inwards. Shoan and Hojin Osho were in the center with lit candles, and we spent the first period chanting Rengetsu’s poem “Wild Grasses” to the sweet drone of a shruti box. One stanza reads:

Rather than cutting them down
To spread out or gather up,
Let the wild grasses of autumn be—
I want to enjoy the field
Just as it is. . . .

Chanting this was bittersweet for me as I had spent the morning doing just that. My caretaking practice had been cutting back the tall grasses in the Sangha House beds. But of course, the poem is about practice, and about us, the Wild Women of the Way. I realized as the harmonies rose around me that this sesshin was the first time I’d felt free to let a little of my own wildness out at the Monastery.

When I first came into residency, I didn’t know a thing about Zen and I was constantly worried about messing up. I tried hard to learn the forms and do everything perfectly, fearful of reprimand or of somehow offending the teachers or Zen itself. In contrast, this weekend felt like an embodiment of the teaching that we are enough just as we are. We are not far from the Way because we never left it. Rather than mentally beating myself up for bowing at the wrong time or letting an oryoki bowl clatter, I met my internal critic with a smile and a shrug. Messing up is how we learn, and compassion for all starts right at home. 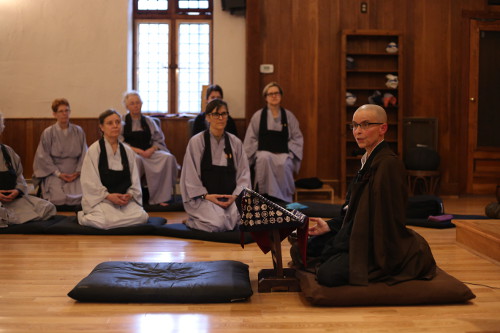 I had never heard a Dharma talk especially for women before and was shocked at how special and lovely it felt to have women’s experience addressed directly. The tenderness, vulnerability, strength, and passion that was shared touched my heart. If these women whom I respect so much and have made this way their life can be open about being a real, messy human who struggles and succeeds, loves and loses, so can I.

Right before I left, Ikusei asked if I’d be back. I started to say, “I’ll try” but stopped myself. I’ll be here. I need this.