The transition from Zuisei, Dharma Holder, to Zuisei Sensei was a week in the making.  It was a week that was mysterious and awe-inspiring, poignant and beautiful.  For me, it was an enormous privilege to be present for it, bearing witness to this important step in the development of the Mountains and Rivers Order and in the life and development of Zuisei Sensei, herself.

Much of the transmission process was invisible to the outside observer.  The Buddha Hall was closed to the sangha for the week as the space became the focal point for both a sustained liturgy and further dialogues between teacher and student.  Still, the modest yet moving ceremony on Sunday felt like buttoning the last button on a newly created garment – necessary for completion but with the all of the real work already completed.  Zuisei Sensei received a new rakusu from Shugen Roshi and took her seat – itself wearing a new outfit: teacher’s gold. See excerpts of the ceremony below.

When Roshi invited Zuisei to say a few words, she began by thanking her father Eduardo, who came all the way from Mexico City to be here for the ceremony, her mother who passed away some years ago, and then Shugen Roshi, her principle teacher since the passing of Daido Roshi in 2009. 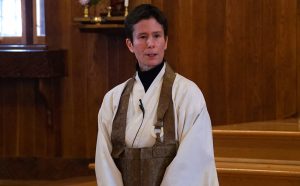 Zuisei also thanked, her wife, Tenkei Lennon for steadfast love and support.  To write these words now, afterwards, they sound so simple and perhaps even obvious. But in the moment they were fully charged and alive, as real and heartfelt as any words ever spoken.  As Roshi said, if we are not moved, we probably are not listening. Audio from the shared discourse:

Roshi closed the ceremony with a poem that spoke of gratitude, both for those who came before and those carrying the teachings forward:

Countless times my teacher went back into the dragon’s cave for me.

All for the sake of today.

This difficult and easy –

It’s like the last cold wind before spring comes.

But not a single step has been taken.

I bow within the footprints of the clear-eyed ones.

How can I express my gratitude?

The face I see is yours. 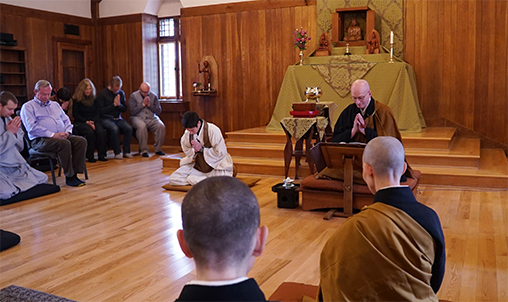