Welcome to Zen Mountain Monastery. This weekend in the Zen training workshop we’ll be looking at the basis of Zen training. We’ll be discussing the philosophy, the underlying theories. There will be plenty of opportunity for questions and answers, but by far the most critical thing that will be happening is the experiential aspect of the training. Each part of the day is scheduled and everything that you experience this weekend will be poin ing to the same place. The whole point of Zen training, all of the eighty-four thousand subtle gestures that we do, have one point and one point only, and that is the realization of the self.

“Special transmission outside the scriptures”—all religions have their core texts. The Bible, the Koran. A religion usually has its beginning in a religious experience of the founder, and in the period of that person’s lifetime he or she tries to communicate what that experience was and to guide disciples to follow it. Then of course, sooner or later, the founder dies and the disciples that remain try to collect the words and sayings of that founder, which become the core texts. People study the texts, recite the texts, repeat the texts, and within a few hundred years usually an institution forms and then you have priests and rituals and ceremonies to reinforce that basic teaching. Buddhism is no different. But Zen is a special transmission outside the scriptures. That is, what Zen has to transmit is not to be found in the words and letters that describe reality, but rather in the direct experience of that reality itself. That’s what Bodhidharma meant. It’s not that words and texts have no value, but that’s not what is transmitted. What is transmitted is the religious experience of the founder, not the words that describe the religious experience, but the thing itself—the vital, living experience of enlightenment that was the enlightenment of Shakyamuni Buddha, the founder of Buddhism. Zen has nothing to do with explaining, understanding, believing. It’s got to do with the direct experience itself. And that direct experience is, in and of itself, transformative. Once having realized it, it’s no longer possible to live your life in the old way because your way of perceiving the universe and perceiving yourself is transformed.

“No dependence on words and letters.” We depend on intellection a lot in the West. We have one of the finest educational systems in the world. We spend a lot of time developing the left hemisphere of the brain, the linear, sequential aspects of conscious- ness. And that is wonderful and it’s necessary, no question about it, but that’s only one half of what human existence and human potential is about. There is another part of human consciousness that is direct, intuitive, and immediate; the right hemisphere of the brain. It’s that aspect of consciousness that takes those intuitive leaps that are part of the great advances we make, not only in religion and the arts, but in science as well. Zazen begins to open up that aspect of consciousness.

The Way We Begin Zazen is by quieting and focusing the mind by working with the breath. But don’t let that fool you. Zazen is not meditation. Zazen is not mudras and mandalas and mantras. It’s not awareness and it’s not single-pointedness of mind. Zazen is sitting Zen. And Zen is a way of using your mind and living your life, and doing it with other people. And at the same time, Zen doesn’t provide a handbook. You have to go very deep into yourself to find the foundations of it. So, what we discover on the cushion in that stillness that comes from working with the breath ultimately manifests itself in the activities of the ten thousand things.

We begin first by sitting still, then slow kinhin or walking meditation—the same concentration is maintained. One step with each cycle of the breath, the same concentration. Then the walking becomes faster and now several steps for every cycle of the breath, still maintaining that same attentive- ness. The breath and the mind are more than connected; they are the same thing. When the mind is agitated, the breath is agitated. When the mind is at rest, the breath is at rest. In the course of the day, zazen manifests itself in many forms. After sitting meditation, there is a service with bowing and chanting. The same concentration is applied to the activities of using the voice and the body. Following that, a meal—to which you bring the same kind of awareness that comes out of zazen, and then to work practice, and then to the everyday tasks of running the monastery. Daily life—that’s ultimately what it’s about.

“No Dependence On words and letters. Direct pointing to the human mind.” Here at Zen Mountain Monastery, that direct pointing to the human mind takes place in several different ways. The most important way, of course, is zazen. Ninety-nine percent of what a student accomplishes is accomplished on that cushion working with oneself. Because the actual fact is, there are no Zen teachers and there is nothing to teach. You already have what you need, but it needs to be realized and that realization takes place in zazen on that cushion. No one can give it to you. It means peeling back the layers of conditioning, the programming that’s been going on since birth. All of us were programmed by our parents, by our teachers, by our culture, by our education, by our peers, so that by the time we reach adulthood we don’t know who we are or what our life is about. Zazen gets underneath all of that conditioning to the ground of being. One has to realize the ground of being for oneself, and learn to live one’s life out of that realization, not out of something that someone has told you or that you believe, or that you understand, but rather your own direct experience of the ground of being. That’s what we call actualization.

Zazen is the heart of the direct pointing to the human mind. Face to face teaching is another aspect of it. Another part is liturgy —the chanting, the bowing. Work practice, body practice, art practice, academic study, all of these things have something to con- tribute to the process of the mind to mind transmission that is realization of the nature of the self. Regardless of what your religion is, regardless of what your daily occupation is, this is a process that can deepen your appreciation of it and can help develop clarity. 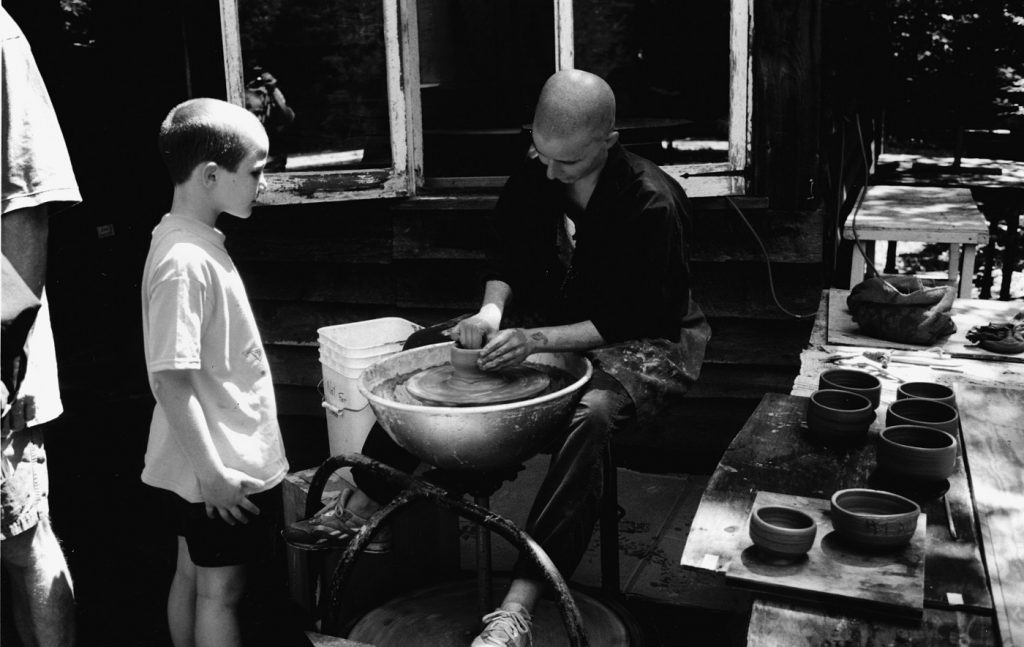 Most of us are preoccupied. We go through life preoccupied. We are preoccupied with the past, which doesn’t exist—it’s already happened. Or we’re preoccupied with the future, which doesn’t exist—it hasn’t happened yet. And while we’re so preoccupied with the past and the future, we miss the moment- to-moment awareness of our life. We look, but we don’t see it. We listen, but we can’t hear. We eat, but we don’t taste. We love, but we don’t feel. All of the data is there, the senses are receiving all of the information, but somehow cognition is not taking place. Why? Because of that preoccupation. And one of the important things you can get out of this weekend is to see how zazen can help you be present in the moment-to-moment reality of your life. Otherwise, life slips by and you barely notice it in passing.

Seeing Into One’s Own Nature is realizing the nature of the self. What is the self? When you ask somebody that question, “What is the self?” you usually get an answer that describes the aggregates. My self is my history, my thoughts, my feelings—those are aggregates. I ask you what a room is and you say, “Walls, ceiling, floor, doors”—those are aggregates. What is roomness itself? What is self-ness itself? What is the self that’s expressed in self-expression? That’s what the Zen koans are about—getting to the heart of that matter. Zen koans are apparently paradoxical questions that are not really paradoxes. Paradoxes exist in language, in the words and ideas that describe reality—there are no paradoxes in reality. So, Zen koans are specifically designed to short-circuit the whole intellectual process. You can’t solve a koan by linear, sequential thought. You need to make an intuitive leap. There needs to be intimacy; not the kind of intimacy that you find on Hallmark greeting cards, but intimacy with the whole body and mind. The only way to see a koan is to be it. And the only way to be it is to forget the self. What does that mean? Master Dogen said, “To study the Buddha way is to study the self. To study the self is to forget the self. To forget the self is to be enlightened by the then thousand things.” It’s a frightening thing for many people—to forget the self. We think who we are is this bag of skin. Everything inside the skin-bag is me, and everything outside is the rest of the universe. Well, it’s not like that, and when you go deep into yourself, you find out that who you are is much, much more than just this skin bag.

There is direct pointing to the human mind, then seeing into one’s own nature, and the attainment of Buddhahood. Until you realize yourself the way the Buddha realized himself, the way thousands of Buddhist men and women for centuries have realized them- selves, until you do that, Zen training is not complete. The whole point is realization and actualization of the Way in your own life.

As I Said At The beginning, we’ll be doing a lot of talking this weekend, but by far the most important thing is the hands-on, experiential aspect. Keep in mind, if you really want to understand the heart of this workshop you’ll find it sitting on your cushion when you go very deep inside yourself, beyond all of the words and the ideas that describe reality, to that ground of being itself. The zazen you’ll be doing in the morning and the evening frames the day, and it can create a whole different way of perceiving yourself in the universe, of living your life. Please take advantage of the weekend; really put yourself into it. Suspend judgment until you’ve tasted it. Sample it. Chew it. Digest it. And then, if you don’t like it, spit it out. But by all means, try it. It’s up to you. I hope you’re able to take some parts of what you experience this week- end back home with you and put it to work in your life. Thank you.

Edited transcription of a recording made in 1990. From Zen Mountain Monastery Archives. Copyright © 2015 by Dharma Communications.