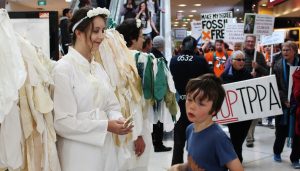 The women in pale makeup, white robes and wings weren’t protestors, though—they were angels. The angel image was powerful both in the media and in my imagination. It stuck. When one member of our small group of Christchurch sangha-activists suggested that we make our own angel costumes, agreement was quick, and we began.

Angels are not statisticians, climate scientists, politicians or environmentalists. They are certainly not the blandly upbeat purveyors of corporate greenwashing. Angels are bearers of heavenly messages about matters of ultimate importance. The message: climate change is a matter of life and death. Climate change does not get written on death certificates, and death certificates are not written for plants and animal species or cultures. Perhaps one day these massive collective deaths due to climate change will be memorialized en masse, publicly, as we do for humans, by building war memorials, but we’re not there yet. The message of death has not yet come through, let alone the message that there is life too: a life and way of living through this climate crisis that does not deny the full reality, the urgency, and the implications of climate change.

Initial ideas can be heavenly and inspiring, but costume designing and making, planning, and organizing are all lots of work and cost money. The local 350.org activist group was enthusiastic about the idea, and supportive in helping to secure a grant for material costs. The time seemed ripe to bring the wider sangha on board. Before sesshin, Shugen Sensei ran a powerful weekend workshop focused on responding to climate change, so we hoped people would be on board with the idea. Furthermore, we had record numbers of sesshin participants for caretaking work, due to our improved website and marketing. I felt unsure about how our teachers, senior student and sangha might respond to connecting our activism into something as introspective and contained as sesshin, but the willingness and enthusiasm of the sangha helped immensely with both the work and the feeling of support in our activism.

Fast forward to September the 10th. It’s a strange feeling, to have a hundred people stop and stare at you. To clarify: I’m not talking about being looked at, or watched, or paid attention to. I’m talking about being stared at. Because six of us angels are walking through Christchurch’s busiest mall on a weekend with giant wings strapped to our backs, wearing white robes, pale make-up, and eyeliner. I feel a ash of gratitude for knowing that I can keep focused on my breathing to help me relax, so that I don’t get panicky or have my open smile become an unnatural grimace.

I try to make as much eye contact as possible. I see amusement—we’ve become part of the entertainment of the mall experience where people come to see and be seen. I see stress and busyness—we’re an irrelevant delay to people’s plans, to be discounted. I hear impatient comments from the people we momentarily block as we t our wings through a bottleneck. I see fear in the mall management’s protests about health and safety. I see a film of dull detachment that wouldn’t shift even if we brought a live elephant into the room. I see excitement and curiosity—this is most evident in the pre-teen girls, the boldest of whom come forward to make contact. I don’t speak, but hand them a small gift with which they run off excitedly. I see some unwrapping the twine-wrapped, feathered package to read our message from nature. Adults receive our messages too, and boys who step forward from their group in an act of boldness, as if to count coup.

I hope that this is more than a love of spectacle. It’s exhausting and surprisingly anxiety provoking work. Hopefully it helps me and others to become more comfortable or even bold in breaking the taboos around life and death and our climate. I long to become flexible enough to snatch every opportunity for positive change that I can from out of the jaws of my own and other’s inhibition or reactivity. Our public meditation vigils and Climate Angels have attracted a range of participants from the communities of both activists and spiritual practitioners. My impression is that all these groups have a lot to offer and share with each other about how to effectively engage around climate change, both in terms of skills and personal insights. Let’s keep exploring this together.

—Michael Taikyu Apathy, MRO, with thanks and acknowledgements to 350.org, sangha members who helped create the angel costumes, Selina Seian Clare, and Lucette Hindin who led this action.

NextFrom The Perfection of Wisdom