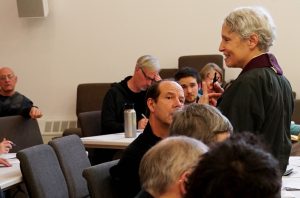 As a supervising chaplain at Vassar Hospital in Poughkeepsie, NY, helping people through their final days, hours and moments, Hirsch-Abramson has seen transformation.

“I work toward authenticity,” she said. “We don’t have time to waste.”

During the daylong workshop, Hirsch-Abramson guided the group of sangha members and monastics through exercises that put our lives under a microscope. In essence, we became mirrors of our own lives. Indeed, one of the exercises was to look upon our life as if in a mirror, starting as babies and going on till old age.

Looking back from a supposed end-point tells us much about who we think we are, and what we want to do with this uncertain amount of time we each get in this human form. While the fear of death was woven intricately into the day’s presentations and exercises, it was not a focus.

And the pain is because “people cling,” she said. “You can feel it. It’s palpable.”

The day was structured not to take that fear away, but to lessen the clinging. In this light, the end of what we know of as ourselves—this human consciousness that we sometimes thrash about in yet are loath to leave behind—is really just a way of seeing this lifetime as one long moment. Death is not just the future, but is also the past and present. Looking back on one’s life from the standpoint of the end is not something to fear.

“There’s no reason not to celebrate ourselves,” Hirsch-Abramson said.

After a contemplative, silent lunch, participants reconvened to do just that. 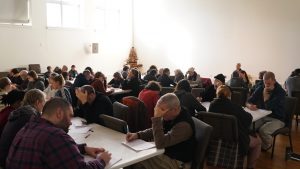 Rev. Jinpu leads the retreat through a writing exercise.

During lunch we had written to ourselves, with the instructions: “You have died…. Now write a letter to yourself, as if you were your best friend.” Among other things, we wrote about what we’d always wanted to tell our parents. What we had liked/loved most about ourselves. What our saddest moment was, our most fun, our regrets, our gratitude.

Then we imagined a posthumous interview with our “Incarnational Counselor,” our first stop in the bardo. We examined what parts of our lives we’d like to retain in our next life, what we had learned from this one, what we still needed to learn, what we’d missed out on, and a host of other things we could carry into our next—or rather our current—life.

Hirsch-Abramson gave us all the questions as handouts that we filled out during the course of the day. At the end, what remained were detailed to-do lists—empowering, given that we were not, in fact, dead. The last thing she had us do was publicly vow to bring something new into our lives.

To help us wrap our heads around our eventual demise, Hirsch-Abramson began the day by reading the group the Nine Contemplations of Atisha, an eleventh-century Tibetan Buddhist scholar, taken from a teaching by Roshi Joan Halifax. We listened closely as she paused between each one so that we could take it in.

The lessons of that day, of course, will take time to implement. It’s a new perspective that takes one deeper into our spiritual practice, into questions like: What is this life? Without death, is there even a life?

We act as if we’ve got all the time in the world. And in one sense, we do. Except when, one day, we don’t. 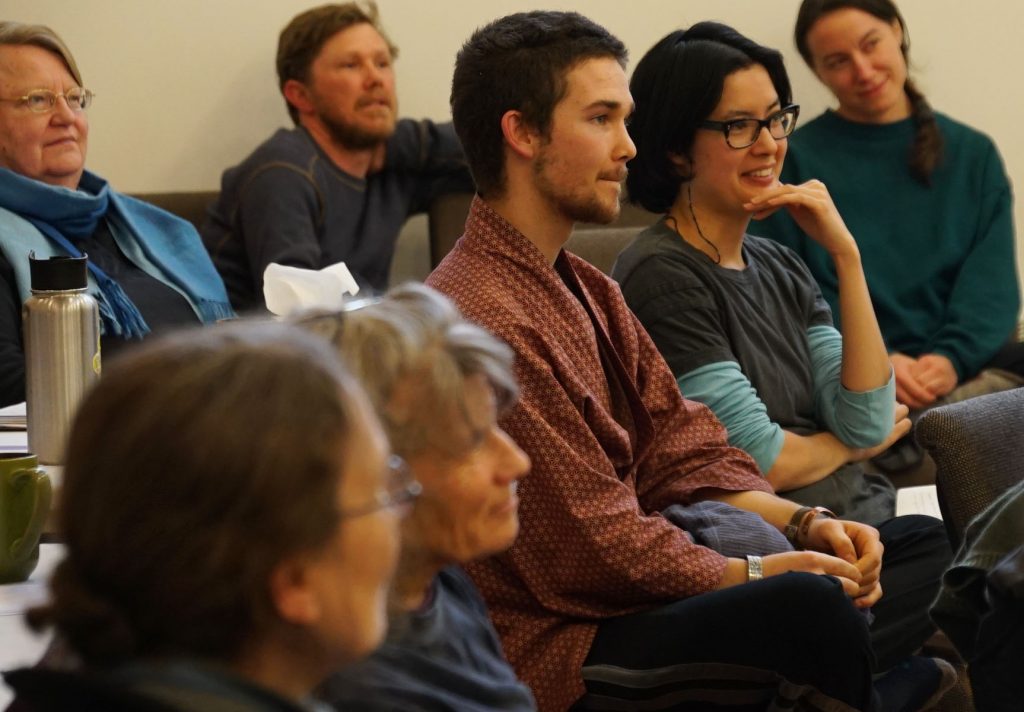 The investigation of mortality need not be dour!